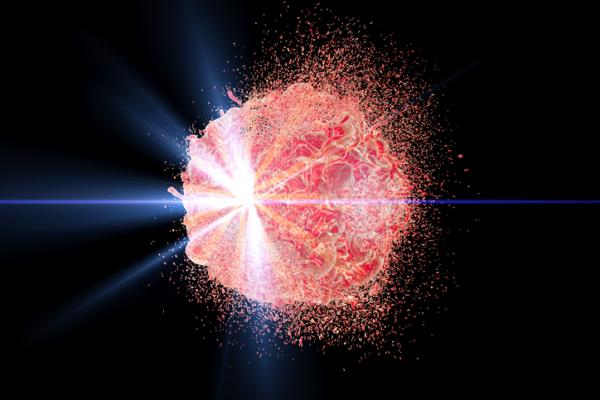 May 19, 2021 — A small drug molecule that appears to protect normal tissue from the damaging effects of radiation, may simultaneously be able to boost the cancer-killing effect of radiation therapy, according to a new study led by scientists at University of Iowa, University of Texas Southwestern Medical Center and Galera Therapeutics, Inc.

The study, published online May 12 in Science Translational Medicine, suggests that the drug's dual effect is based on a fundamental difference between the ability of cancer cells and healthy cells to withstand the damaging effects of a highly reactive molecule called hydrogen peroxide, which is produced during the dismutation of superoxide.

The drug, known as Avasopasem manganese, is made by Galera Therapeutics. It acts like a natural enzyme called superoxide dismutase and converts superoxide into hydrogen peroxide. Based on its ability to "mop up" damaging superoxide molecules, which are produced by radiation treatment, the drug is currently in clinical trials to test its ability to protect mucosal tissue from the side-effect of radiotherapy.

The study showed that in mouse models of lung and pancreatic cancer the drug synergized with radiotherapy to such an extent that the treatment was able to destroy the tumors. The study also showed the greatest synergy occurred with high daily dose radiotherapy, similar to the doses delivered with Stereotactic Body Radiation Therapy (SBRT) currently used to treat some patients with cancer.

"These findings are the result of collaborative efforts over several years by scientists primarily at Iowa, UT Southwestern Medical Center, and Galera, and are already being translated into several ongoing clinical studies," added Spitz, who is a member of Holden Comprehensive Cancer Center at the UI. "One of those early phase trials recently reported that Avasopasem manganese in combination with high daily dose radiotherapy appears to nearly double overall survival in patients with pancreatic cancer compared to a placebo plus the same radiotherapy. Our study lays out the novel scientific basis for this potentially ground-breaking therapy for patients."