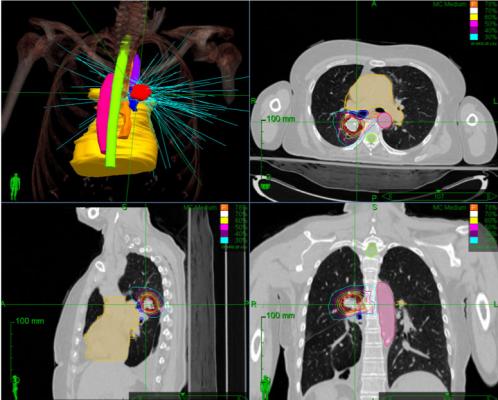 April 23, 2021 — A phase 1 clinical trial led by investigators at the University of Chicago Medicine testing the effects of stereotactic body radiotherapy for treating multiple metastases has determined that treatments used for single tumors can also be safely used for treating patients with multiple metastases. The study was run through NRG Oncology and sponsored by the National Cancer Institute. The results were published on April 22 in JAMA Oncology.

Cancer is traditionally treated with a combined approach, with clinicians using surgery, chemotherapy and radiation therapy to kill and remove cancerous tumors. Systemic treatments such as chemotherapy often are not enough to stop the cancer’s growth.

This approach has been used successfully to treat small, early stage tumors, but until now, it was not clear if such high doses of radiation would be safe in patients with multiple tumors due to metastatic cancer. Because SBRT uses multiple, high-intensity radiation beams, physicians have to be especially careful in locating tumors and targeting the radiation beams to maximize benefits and minimize risks — a challenge that Steven Chmura, M.D., Ph.D., likened to trying to “cross the beams” in the “Ghostbusters” movie.

“Part of the difficulty is working out the logistics for testing this approach in patients across multiple institutions,” said Chmura, Professor of Radiation and Cellular Oncology at UChicago Medicine. “We’ve thought for a long time that you could treat three or four metastases at the same time, but it’s very technically complicated to do so. But before we could test this in something like a large, phase 3 clinical trial, we had to prove that we could get multiple institutions together and come up with a ‘cook book’ for how to do this right, ensuring that treatment was the same across the board. This was really like seven phase 1 clinical trials rolled into one.”

A phase 1 clinical trial, led by Chmura, set out to test the safety of such an approach. In a trial of 39 patients who had breast, prostate or non-small cell lung cancer with at least three metastases or two metastases in close proximity, the investigators determined that there were no treatment-related deaths and that the approach was safe enough to begin phase 2/3 clinical trials in a larger group of patients.

“At the end of the trial, the primary endpoint of six-month dose limiting toxicity was 0%,” Chmura said. “This shows us that treating three or four sites of metastases throughout the body with these high-ablative doses of radiotherapy is safe.”

Radiation therapy is not without risks. While the study found that no patients experienced side effects severe enough to call off the study, several adverse events were linked to the treatment, including gastric ulcers, broken bones and bone pain, and pneumonitis. In many cases during the four-year trial, these side effects appeared months to years following treatment, highlighting the importance of maintaining long-term follow-up contact with these patients. Overall, however, none of these treatments or side effects led to increased risk of death.

“People have been saying for years that if we used SBRT in patients with multiple, limited metastases, we could potentially cure more patients,” said Chmura. “But we needed to conduct these large-scale, phase 2/3 clinical trials to prove that. And before we can do those large trials, we had to set up the infrastructure. The greatest challenge was having a whole team of people come together and figure out how we could define the doses and manage the real-time quality assurance to make sure every single patient had the best treatment possible.”

With this collaborative infrastructure in place, the investigators have launched additional trials to test the efficacy of stereotactic body radiation therapy for treating patients with multiple metastases. The group is currently enrolling patients in a phase 2/3 trial for using SBRT for the treatment of metastatic breast cancer, with the goal of treating up to 450 people.