Genius exam improves cancer detection and reduces recall rates for women of all ages and breast types, including the nearly 50 percent of women of breast cancer screening age who have dense breasts 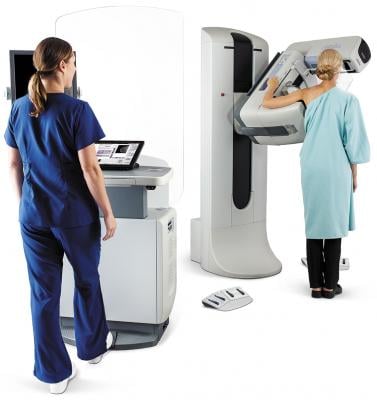 Hologic, Inc. announced that the Genius 3D Mammography exam is now the only mammogram that is FDA-approved as superior to standard 2-D mammography for routine breast cancer screening of women with dense breasts.

The Genius exam has been commercially available in the United States since 2011, and the newly approved physician labeling is based on clinical studies proving that the exam improves invasive breast cancer detection while reducing unnecessary recalls among women of all breast densities, including those with dense breasts.

Between 40 and 50 percent of women ages 40 to 74 have dense breasts. Density is only identifiable on a mammogram or other imaging modalities, and reflects how much fibrous or glandular tissue is in the breast. Women with dense breasts often require additional imaging, which can result in increased patient anxiety and unnecessary costs. Perhaps most importantly, women with very dense breasts are four to five times more likely to develop breast cancer than women with less dense breasts. To increase awareness of this issue, thirty-one states require some level of breast density notification after a mammogram, but often this can result in confusion for women receiving the notification letters.

"Radiologists and referring physicians needed an answer for how to screen the roughly half of women with dense breasts, because until now, this patient population was confused and frustrated without a clear path forward," said Pete Valenti, Hologic's Division President, Breast and Skeletal Health Solutions. "We are pleased today to provide this definitive guidance from the FDA that the Genius exam is a superior screening solution for women with dense breasts. This is yet another reason referring physicians can feel confident in recommending Hologic's Genius exam."

Separately, subgroup data analysis from a previously published retrospective multicenter clinical study (JAMA 2014) supporting breast tomosynthesis as the standard of care in women starting at age 40 has recently been made available. This study, "Effect of age on breast cancer screening using tomosynthesis in combination with digital mammography," led by Elizabeth Rafferty, MD, was published online in advance of print in Breast Cancer Research and Treatment and analyzed the performance of tomosynthesis in specific age groups. The study showed that with the addition of tomosynthesis to digital mammography, detection rates for invasive cancer increased significantly for women ages 40 to 69.6  At the same time, there was a significant decrease in recall rates for all age groups, with the largest performance gains seen in women age 40 to 49.6

"Patients, and even referring physicians, have been confused about the current recommendations on when to start screening for breast cancer given the conflicting guidance from medical societies," said Rafferty. "The fact that tomosynthesis offers specific benefit to women in their 40s is not surprising, but the magnitude of that benefit was unexpected. We needed a better screening tool, and tomosynthesis fills that void. The substantial increase in cancer detection, along with fewer false positive studies, should address any concerns that have lingered over screening this population of women. The time has come for tomosynthesis to be viewed as the standard of care for breast cancer screening, beginning at age 40."

The new density labeling is the latest notable claim for Hologic's Genius exam, which is the only mammogram clinically proven to detect 20 to 65 percent more invasive breast cancers compared to 2D alone, with an average increase of 41 percent.7

"It is clear that all tomosynthesis is not the same," said Valenti. "The key benefits of Hologic's Genius exam elevate it above all other tomosynthesis offerings in the marketplace. The Genius exam satisfies all the critical needs for breast cancer screening, from improving invasive cancer detection to significantly reducing recalls, and is designed to provide meaningful improvements in patient satisfaction and reduced costs to health systems."