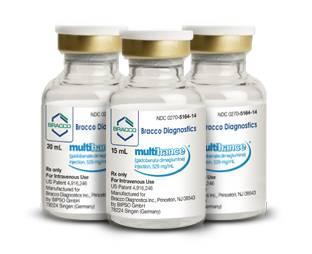 July 31, 2012 — Bracco Diagnostics Inc., the U.S.-based company of the Bracco Group, announced that the U.S. Food and Drug Administration (FDA) has approved the use of MultiHance (gadobenate dimeglumine) injection, 529 mg/mL, in magnetic resonance angiography (MRA) to evaluate adults with known or suspected renal or aorto-ilio-femoral occlusive vascular disease.

MultiHance was already the highest relaxivity gadolinium-based contrast agent (GBCA) available for intravenous use in magnetic resonance imaging (MRI) of the central nervous system (CNS) in adults and pediatric patients. The recommended dose for both MRI of the CNS and MRA examinations is 0.1 mmol/kg (0.2 mL/kg) of MultiHance.

The approval of MultiHance in MRA was granted based on data submitted to the FDA that included safety and efficacy results from two large, prospective, multicenter clinical trials (one for each arterial vascular territory: renal and aorto-ilio-femoral). Assessment of diagnostic efficacy for detecting/excluding clinically significant steno-occlusive disease (? 51 percent stenosis) was based on comparisons of sensitivity and specificity between MultiHance MRA and non-contrast MRA, with digital subtraction angiography (DSA) as the standard of truth. Results of both trials showed a statistically significant increase in both sensitivity and specificity of MultiHance-enhanced MRA over non-contrast MRA in detecting clinically significant steno-occlusive disease.

“MultiHance has long been distinguished in the MRI of the CNS as a gadolinium-based contrast agent characterized by a strong increase in relaxivity in any medium containing serum proteins, contributing to increased contrast-to-noise ratio and lesion-to-brain ratio and improved visualization. It also counts a strong record of safety that spans over 14 million administered doses,” said Alberto Spinazzi, senior vice president, group medical and regulatory affairs at Bracco Diagnostics. “The approval of MultiHance for use in MRA of renal and runoff arteries delivers to the radiologist a powerful tool, bringing the power of high relaxivity to the assessment and diagnosis of debilitating vascular diseases.”