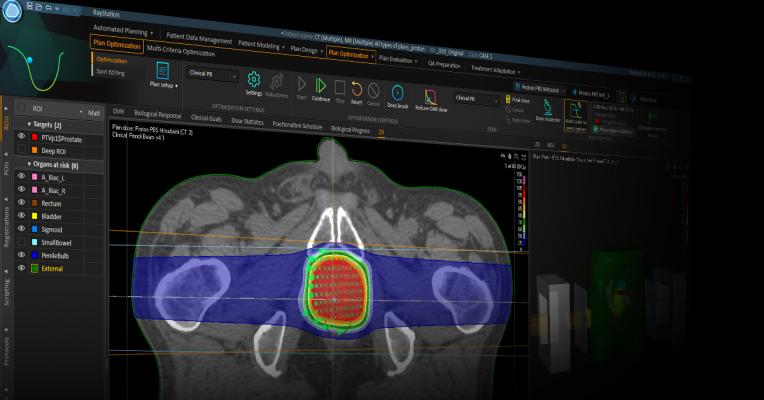 November 2, 2020 — Bladder preservation with trimodality therapy can be a safe and effective alternative to cystectomy for selected patients with muscle-invasive bladder cancer. The phase II NRG Oncology NRG-RTOG 0712 trial evaluated two regimens. One was the prior RTOG standard using 5-flourouracil and cisplatin with twice daily radiation (FCT), and the other a regimen of gemcitabine and daily radiation (GD) which had demonstrated efficacy in single institution clinical trials. This trial sought to determine if either or both of these regimens demonstrated sufficient efficacy to be included in future larger studies. The previously published results demonstrated high efficacy rates and low rates of distant metastasis in both arms. The updated results were presented at the virtual edition of the American Society for Radiation Oncology's (ASTRO) Annual Meeting in October 2020.

NRG-RTOG 0712 accrued 66 eligible patients with muscle invasive bladder cancer for analysis and randomly assigned them to either receive the FCT or (GD) regimen. The trial was designed to determine if either or both treatments exceed a 3-year distant metastasis free (DMF3) rate of 75% defined as the benchmark for efficacy. Researchers on the trial also assessed 5-year distant metastasis free rates (DMF5), toxicity, complete response, and bladder intact distant free survival for each treatment arm. This trial was not statistically powered to compare the two treatment regimens.

With a median follow up of 7.3 years, the FCT treatment arm yielded a 79% DMF3 rate and the GD treatment arm had a DMF3 rate of 85%. Secondary objectives and efficiency endpoints data demonstrated that: DMF5 was 70% in the FCT arm and 77% in the GD arm; 3-year bladder-intact distant metastasis free (BI-DMF3) rates were 67% for the FCT treatment and 72.5% for GD and 5-year rates (BI-DMF5) were 65.1% for FCT and 72.5% for GD; and, post-induction complete response rates were 88% for FCT treatment and 76% for GD treatment. 58% of patients in the FCT treatment arm had treatment related-grade 3 or 4 hematologic, gastrointestinal, or genitourinary toxicities and 52% of patients in the GD arm exhibited these toxicities. Both regimens demonstrated a DMF3 greater than 75%, thus confirming gemcitabine and daily radiation is an acceptable alternative treatment option.

"Not only did this trial conclude that gemcitabine and daily radiation is an acceptable regimen with favorable distant metastasis free rates at 3 years, the results also indicate that both treatments maintain their high rates of distant metastasis free at 5 years and both treatments had low cystectomy rates with high overall survival rates. The efficacy of the GD regimen may facilitate wider adoption of bladder preservation as many patients have comorbidities that preclude the use of cisplatin. The daily radiation schedule is also easier for patients and treatment centers to administer than twice daily treatment which will also likely increase interest in this strategy. These findings are important to future trials that may assess a systemic therapy for this muscle-invasive bladder cancer," stated John J. Coen, M.D., of GenesisCare ( formerly 21st Century Oncology) and the Principal Investigator of the NRG-RTOG 0712 study.