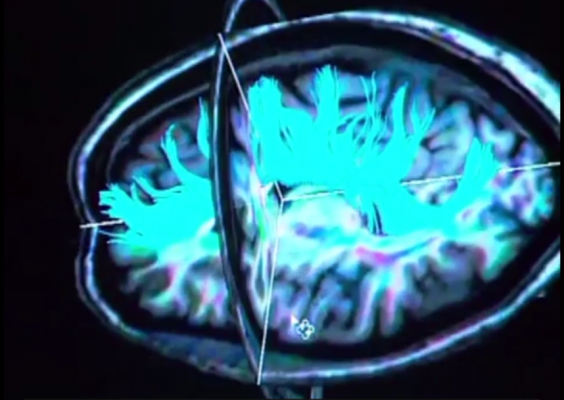 According to the Centers for Disease Control and Prevention (CDC), obesity has more than quadrupled in adolescents over the past 30 years. It is estimated that more than one-third of children and adolescents in the United States are overweight or obese. Obesity in adolescence is associated with a number of health risks, including cardiovascular disease and diabetes.

The study at the University of Sao Paulo in Brazil included 59 obese adolescents between the ages of 11 and 18, and 61 healthy control adolescents matched for gender, age, socio-economicl classification and education level. The adolescents were classified by the World Health Organization criterion for obesity. They had no other known chronic diseases or conditions. The study participants underwent diffusion tensor imaging (DTI) of the brain to evaluate white matter integrity.

DTI is a type of MRI exam that measures functional anisotropy (FA), the microscopic motion of water molecules within and surrounding the brain's white matter fibers. Low FA values indicate greater disruption within the white matter.

"DTI is a relatively new MRI technique not widely used in clinical diagnosis," said study author Pamela Bertolazzi, a biomedical scientist and Ph.D. student in the neuroimaging laboratory at the University of Sao Paulo.

The results showed loss of white matter integrity in several brain regions in the obese patients. Compared to the healthy controls, the brains of the obese adolescents showed a decrease in FA values in areas of the brain including the amygdala, hippocampus, thalamus, cingulate gyrus, fornix, insula, putamen, orbital gyrus and bilateral hypothalamus. Several of these regions are involved in appetite regulation, impulse control, emotions and reward and pleasure in eating.

"The data reveal a pattern of involvement among brain regions that are important in the control of appetite and emotions," Bertolazzi said. "There was no region of higher FA in obese patients compared to the control group," she added.

The researchers hope that these findings will offer new tools to combat this global public health crisis.

"Childhood obesity has increased 10 to 40 percent in the last 10 years in most countries," Bertolazzi said. "If we are able to identify the brain changes associated with obesity, this DTI technique could be used to help prevent obesity and avoid the complications associated with the condition."

Read about other Key RSNA 2017 Study Presentations, Trends and Video.