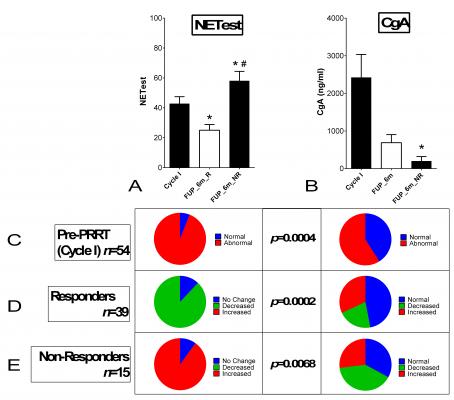 June 23, 2016 — Malignant neuroendocrine tumors (NETs) are relatively rare, notoriously difficult to treat, and associated with poor long-term survival. According to research presented at the 2016 Annual Meeting of the Society of Nuclear Medicine and Molecular Imaging (SNMMI), June 11-15 in San Diego, an investigative blood test could predict how patients will respond to peptide receptor radionuclide therapy (PRRT) before they commit to a course of treatment.

Cancerous NETs can develop in a variety of places where hormone signaling occurs between nerve cells and organs of the endocrine system, but the most common origins of these tumors are in the gastrointestinal tract, the lungs and the pancreas. These cancers sneak up on oncologists due to their rarity and the fact that symptoms such as flushing, diarrhea and sweating are often regarded as unrelated to disease and part of normal life events. Most cases are not caught until these tumors have already spread to other organs, making them difficult to treat with conventional means. A targeted treatment established in the early 2000s called peptide receptor radionuclide therapy (PRRT) zeros in on active peptide receptors that are over-expressed on the surface of NETs. The injected drug binds specifically to these receptors and knocks out tumors by irradiating them with a powerful dose of short-range radioactive material while sparing healthy tissues nearby.

PRRT has helped many patients and is associated with lower systemic side effects, but not all patients respond to PRRT. For this reason, researchers are working to predict patient response prior to the start of treatment with molecular imaging. A visualization of NET receptor activity informs clinicians of the potential path of PRRT in the body prior to therapy. A number of methods have been used, including somatostatin receptor imaging (SRI), since NET tumors commonly express somatostatin receptor activity; but not all do. Here, researchers are investigating a genetic blood test called a NETest, which measures the specific NET genes circulating in the blood that appear to define and predict responsiveness to PRRT.

“This research shows that the molecular information obtained from a simple blood draw can be easily integrated with radiological and molecular imaging to provide a more accurate assessment of tumor behavior and response to therapy,” said Lisa Bodei, M.D., Ph.D., of the European Institute of Oncology Division of Nuclear Medicine in Milan, Italy, and a member of the Molecular Imaging and Therapy Service at Memorial Sloan Kettering Cancer Center in New York.

For this study, researchers evaluated a total of 72 NETs being treated with PRRT by using a potent radionuclide agent called Lu-177 DOTATATE over the course of 33 months. Subjects underwent SRI, histological evaluations, a bioassay that tracks a common protein in NETs called chromogranin A, and the NETest. Researchers performed statistical analyses and developed a predictive response index of select NETest genes as a predictor of PRRT success and categorized patients’ response to treatment as either responsive or non-responsive.

Results showed that PRRT led to a 68 percent rate of overall disease control, with median progression-free survival not achieved at the end of follow-up. Researchers were able to determine that 73 percent of low-grade tumors responded to treatment, while only half of high-grade tumors responded. Histological grading, SRI and chromogranin were not able to predict PRRT effectiveness. The NETest exceeded SRI evaluation and predicted both therapy response and non-response. The predictive response index of select NETest genes associated with metabolism, signaling and grading was found to be more than 90 percent accurate.

“Using this method, a patient would be able to know if PRRT would be an effective cancer therapy for them,” said Bodei. “Additionally, further blood tests could be used to monitor the progress of treatment, rather than relying on statistics that are not specific to them as individuals.”