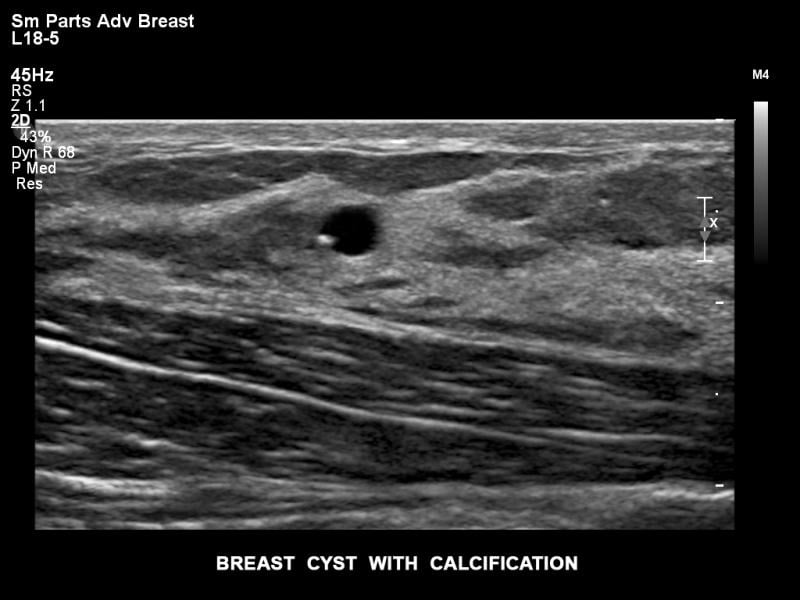 Breast image captured with the Philips EPIQ ultrasound system shows a small cyst with a microcalcification. Image courtesy of Philips

Value-based medicine is reshaping the landscape of medical practice. In this new environment, the key to success is making accurate diagnoses confidently, quickly, and at low cost. Premium ultrasound seems ideally positioned to do that.

"Detailed information is vital in any modality, because sometimes structures are less than a millimeter," said James Jago, Ph.D., who led the development of Philips premium EPIQ ultrasound system, which delivers detailed images at high frame rates. "The challenge with ultrasound is that, historically, you have had to trade frame rate or penetration to get very high-resolution."

See a 360 view of an EPIQ ultrasound room install.

Efficient acquisition of accurate data is the key to high-temporal and spatial images captured at high frame rates. EPIQ's unique architecture turns the key. Whereas conventional systems gather acoustic data one beam at a time, this architecture, called nSIGHT, supports the transmission of multiple ultrasound beams, at high repetition rates, according to Jago, Philips principal scientist in general imaging ultrasound.

Leveraging Philips' proprietary multi-line transmission and reception, each ultrasound beam produces several scan lines for every one delivered by a conventional transducer. Consequently, EPIQ requires fewer beam transmissions to cover the same imaging field. Because frame rate is determined by the time needed to scan the field of interest, EPIQ's frame rates are very high.

nSIGHT processes numerous echoes from many received beams from the transmission of each beam, defining points at different depths from multiple angles. It adjusts and combines signals from multiple transmissions, point-by-point throughout the imaging field, rendering images over a uniform field-of-view. This translates into improved clinical information, says Jago, faster exams, increased consistency from one exam to the next, greater ease of use, and increased diagnostic confidence.

Essentially nSIGHT extends the sweet spot throughout the imaging field, according to Jago, revealing not only structures deep in the body down to a liver capsule but also near-field structures such as muscular striations and breast nodules.

The enormous amount of data required for nSIGHT to work is managed using massively parallel processing, achieved through a combination of hardware and software that has the computing equivalence of 5000 Cray-1 supercomputers. (Each of these predecessors of the modern supercomputer cost in 1980 between $5 million and $8 million — a combined total of $25 billion to $40 billion in 1980 currency.)

EPIQ data are reconstructed in real-time with exceptional image quality and field uniformity, even for the most technically difficult patients. Some patients may be too ill to hold their breath for very long, according to Jago. This presents the risk of motion artifacts, a risk diminished by EPIQ's high frame rates. Or they may be morbidly obese, with layers of fatty tissue threatening to put clinical targets beyond the reach of conventional ultrasound systems.

If sound wave penetration is not sufficient, pathologies may be missed. Or, recognizing the limitations of ultrasound, the provider may refer the patient to an imaging modality that uses ionizing radiation, imposes additional cost, or both, Jago says.

The sensitivity needed to capture the ultrasound signals throughout the imaging field in even clinically challenging patients comes partly from the crystals built into the EPIQ transducers. These crystals form the cornerstones of Philips' PureWave transducer technology. They are highly uniform and extraordinarily pure. This uniformity and purity make the crystals very sensitive. This improves signal-to-noise and bandwidth, which, in turn, improves penetration and resolution at higher frequencies. The results are high quality images and a larger range of patients and clinical applications for any one transducer, and thus shortened exams, quickened workflow, fast patient throughput, and reduced cost, Jago says.

"Also, not having to trade-off penetration, resolution, and frame rate makes the sonographer's job faster by reducing the number of control adjustments that must be made to obtain an acceptable image," he said.

Another key technology is xMATRIX. Characterized by its 2-D array (with crystal elements configured in the X and Y planes), xMATRIX transmits and receives in multiple planes, thereby acquiring volumes of data. When reconstructed, the images provide anatomical context akin to that of CT and MRI, Jago says. And the 2-D array allows the beam to be electronically steered throughout a volume. This extends EPIQ's range to volumetric applications, Jago says, including live 3-D imaging during diagnostic and interventional procedures.

Before the intervention, an algorithm unique to the EPIQ system leverages what Jago calls “anatomic intelligence” to automatically register ultrasound with CT scan data. This algorithm, part of EPIQ Fusion and Navigation, completes in about a minute what might take a highly trained radiologist 20 or 30 minutes to do, according to Jago. "The ultrasound machine recognizes what it sees in the body and decides how to register that information with data from the other modality," he said.

Integrated into EPIQ, ElastPQuses shear wave elastography to simplify the assessment of liver disease by characterizing tissue on the basis of its elastic qualities. ElastPQ can reduce or eliminate the need for liver biopsy in some circumstances, according to Dr. Jago. And the company has plans to go well beyond the liver into other clinical areas.

"There is a huge amount of academic research looking into other possibilities and many of them will come to fruition," he said. "Certainly Phillips is interested in all those applications."

Like sonography itself, EPIQ is evolving, as evidenced by the summer 2016 release of a new version. This new release improves image quality in vascular, breast, and 3-D vaginal applications, as well as provides Live 3-D quantification and automated 2-D views in echocardiography. It also increases security to help protect patient data from hackers, and provides an “ecosystem” of tools, applications, and solutions, called OmniSphere, to boost business efficiency and optimize operations.

"We designed the EPIQ platform to have the capacity for us to bring not just technology that was ready at the launch of the platform but to support innovations that are in development and that we will be bringing out in the coming years," Jago said.