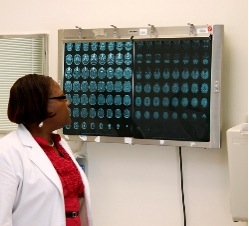 June 8, 2012 — Children and young adults scanned multiple times by computed tomography (CT) have a small increased risk of leukemia and brain tumors in the decade following their first scan. These findings are from a study of more than 175,000 children and young adults that was led by researchers at the National Cancer Institute (NCI), part of the National Institutes of Health, and at the Institute of Health and Society, Newcastle University, England.

The researchers emphasize that when a child suffers a major head injury or develops a life-threatening illness, the benefits of clinically appropriate CT scans should outweigh future cancer risks. The results of the study were published online June 7 in The Lancet.

"This cohort study provides the first direct evidence of a link between exposure to radiation from CT and cancer risk in children," said senior investigator Amy Berrington de González, Ph.D., division of cancer epidemiology and genetics, NCI. "Ours is the first population-based study to capture data on every CT scan to an individual during childhood or young adulthood, and then measure the subsequent cancer risk."

Despite the elevation in cancer risk, these two malignancies are relatively rare and the actual number of additional cases caused by radiation exposure from CT scans is small. The most recent (2009) U.S. annual cancer incidence rates for children from birth through age 21 for leukemia and brain and other nervous system cancers are 4.3 per 100,000 and 2.9 per 100,000, respectively. The investigators estimate that for every 10,000 head CT scans performed on children 10 years of age or younger, one case of leukemia and one brain tumor would occur in the decade following the first CT beyond what would have been expected had no CT scans been performed.

CT scans deliver a dose of ionizing radiation to the body part being scanned and to nearby tissues. Even at relatively low doses, ionizing radiation can break the chemical bonds in DNA, causing damage to genes that may increase a person’s risk of developing cancer. Children typically face a higher risk of cancer from ionizing radiation exposure than do adults exposed to similar doses.

The investigators obtained CT examination records from radiology departments in hospitals across Britain and linked them to data on cancer diagnoses and deaths. The study included people who underwent CT scans at British National Health Service hospitals from birth to 22 years of age between 1985 and 2002. Information on cancer incidence and mortality from 1985 through 2008 was obtained from the National Health Service Central Registry, a national database of cancer registrations, deaths and emigrations.

Approximately 60 percent of the CT scans were of the head, with similar proportions in males and females. The investigators estimated cumulative doses from the CT scans received by each patient, and assessed the subsequent cancer risk for an average of 10 years after the first CT. The researchers found a clear relationship between the increase in cancer risk and increasing cumulative dose of radiation. A three-fold increase in the risk of brain tumors appeared following a cumulative absorbed dose to the head of 50 to 60 mGy (unit of estimated absorbed dose of ionizing radiation). Similarly, a three-fold increase in the risk of leukemia appeared after the same dose to bone marrow. The comparison group consisted of individuals who had cumulative doses of less than 5 mGy to the relevant regions of the body.

The absorbed dose from a CT scan depends on factors including age at exposure, sex, examination type, and year of scan. Broadly speaking, two or three CT scans of the head using current scanner settings would be required to yield a dose of 50 to 60 mGy to the brain. The same dose to bone marrow would be produced by five to 10 head CT scans, using current scanner settings for children under age 15.

In countries like the United States and Britain, the use of CT scans in children and adults has increased rapidly since their introduction 30 years ago. Due to efforts by medical societies, government regulators, and CT manufacturers, scans performed on young children in 2012 can have 50 percent lower radiation doses, compared to scans carried out in the 1980s and 1990s, say the investigators. However, the amount of radiation delivered during a single CT scan can still vary greatly and is often up to 10 times higher than that delivered in a conventional X-ray procedure.

“CT can be highly beneficial for early diagnosis, for clinical decision-making and for saving lives. However, greater efforts should be made to ensure clinical justification and to keep doses as low as reasonably achievable,” said Mark S. Pearce, Ph.D., Institute of Health and Society, Newcastle University, lead author of the study.