Breast MRI: All About Timing 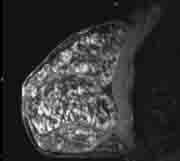 There is a diagnostic advantage in using breast MRI in premenopausal women as demonstrated in a case study by William Teh, M.D., consultant radiologist, department of radiology, Northwick Park Hospital, Harrow, and director of screening, North London Breast Screening Service, Edgware Hospital, U.K.6.

On June 15, 2007, a 38-year-old woman with a maternal history of breast cancer and a personal history of infected, left-sided breast cyst presented for a mammogram and ultrasound of right axillary lump. Previous treatment was limited to antibiotics beginning in February 2006. Her mammogram revealed normal dense parenchyma with no interval change from May 2006. Ultrasound showed multiple bilateral breast cysts, prominent right axillary node with cortical thickness of 3.6-mm. US-guided FNA revealed metastic adenocarcinoma.

Eight days later at a follow-up MRI, day 17 of her menstrual cycle, she had multiple breast cysts (Fig.1) and florid, extensive bilateral background enhancement (fig. 2). She also had prominent right axillary nodes(Fig.3). The results showed there was no definite malignant disease. (BIRADS 2)

Her MRI was repeated on July 11, 2007, on day eight of her menstrual cycle. Again, it showed florid background enhancement, but suggestion of discrete 17-mm Type 2 enhancing mass-like lesion in the right lower outer quadrant (Fig. 4, Fig. 5). The doctor performed an MRI-guided vacuum-assisted biopsy with 20 passes utilizing an 11g Mammotome-MR biopsy system. The results revealed a Grade 2 invasive ductal carcinoma with possible vascular invasion. Because this exam was performed during the most favorable time of the menstrual cycle, the results were not impaired by residual hormonal activity, and hence, were more accurate and revealing.

The patient then underwent re-excision on Aug. 3, 2007. There was further extensive lymphovascular invasion only, according to tests results. From August through December 2007 she underwent adjuvant chemotherapy (FEC x 3 taxitere x 3). Then from January through February of 2008, radiotherapy was delivered to the breast and supraclavicular fossa. Beginning in March 2008, the patient began tamoxifen therapy.

On Jan. 10, 2009, she had a follow-up MRI of both breasts. The results showed a small discrete Type 2 enhancing 7-mm mass in the right upper inner quadrant. A second look ultrasound was performed on January 28, 2009, which appeared normal. On February 25, 2009, a repeat MRI was performed with normal results, and as of June 19, 2009, this patient appears to remain disease free.

What this case study illustrates is the substantial, diagnostic advantage of timing the breast MRI examination in premenopausal women. Since the breasts are less likely to exhibit residual, hormonal activity between the seventh and 14th days of the menstrual cycle, MRI during this time tends to yield better results. Benign hormonal effect in the breasts can render images somewhat difficult to interpret, particularly in high-risk women with dense, fibrocystic breasts.

Any examination that is difficult to interpret must be repeated or postponed until a time when physical conditions are more favorable and the breast images can be acquired. Therefore, breast MRI examinations on premenopausal women performed between day seven and day 14 of the menstrual cycle are more likely to ensure a more accurate diagnosis and prognosis, as well as a more distinct course of treatment.