Image quality enhancements and ease of use for multiple applications and settings, including the point of care, are driving new innovations 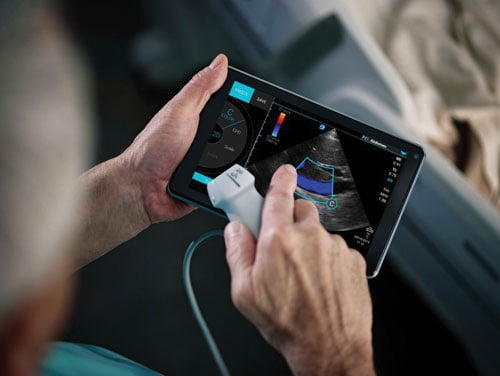 And vendors are realizing that what works for one organization may not work for every organization. “Hospitals can’t always buy the premium system, nor does everyone need a premium system,” said Brubaker. “Customers that are doing well have a broad product line, and vendors can go to them and say ‘You may want to mix this product with this product.’ ”

A desire to improve image quality is pushing ultrasound manufacturers beyond the capabilities of traditional 2-D imaging and increasing the roll-out of 3-D and even 4-D ultrasound systems.

GE Healthcare’s stable of new ultrasound solutions in 2015 was headlined by the new flagship Vivid E95 system which was unveiled during the American Society of Echocardiography (ASE) annual meeting last June. Targeted for cardiovascular ultrasound imaging, the E95 delivers near-computed tomography (CT)-level image quality thanks to GE’s cSound technology. This utilizes advanced algorithms to capture much larger amounts of data — roughly a DVD worth of data per second — and selects pixel-by-pixel the most precise information to display.

Toshiba has focused in recent years on perfusion of small, slow flow vessels in organs, which has traditionally been difficult on ultrasound. The company introduced its SMI (Superb Micro-Vascular Imaging) software in 2014 to capture 2-D images of these vessels, and this year introduced a 3-D version on the Aplio 300 and 500 systems. The technology displays small vessel beds with Doppler flow in grayscale or false-color 3-D reconstructions, which can be fully rotated for even better visualization.

While the visualization improvements with 3-D ultrasound are undeniable, the technology has yet to see widespread adoption, according to Brubaker. “People are saying, ‘I’m perfectly happy with 2-D ultrasound, why should I move to that? It takes more time and I have to learn how to do it,’” he explained. “But I think we are reaching that stage where it is going to be the standard of care.”

He believes that what will ultimately push the technology past that tipping point is its ability to reduce or eliminate operator variability in scan interpretation. “It’s one of the most significant things you have to overcome,” he acknowledged. “When you’re using 2-D you need to do it on repeated cases, and if you’re not getting the exact image or location, it can affect what you’re seeing and ultimately your diagnosis.”

4-D ultrasound has also begun making its way into the market, adding motion into a scan. Prominent systems currently on the market include the Voluson E10 from GE, which includes a curved matrix electronic 4-D probe designed specifically for OB/GYN applications. The system also incorporates HDlive technology to provide four times the ultrasound pathways for improved clarity with increased penetration.

Ergonomics at the Point of Care

Improving ease of use has been an essential factor in the growth of ultrasound imaging, particularly as the demand for POC solutions has expanded. Adaptability is the key for this market segment that is moving radiology outside the walls of the imaging lab to first response scenes, the emergency department and even the patient’s bedside. This has led to the introduction of touch-enabled ultrasound systems, which enhance mobility by sacrificing cumbersome keyboards.

Several vendors have addressed these challenges by introducing handheld ultrasound systems that can easily be transported anywhere. Philips Healthcare opened a new segment of the market last June when it introduced Lumify, the first mobile app-based ultrasound system. The concept turns any Android-based smartphone or tablet device into a handheld, portable ultrasound system simply by plugging a Philips transducer into the device’s USB port and downloading the Lumify app. The transducer performs all of the acquisition functions and a portion of the image reconstruction processing, with the smartphone serving as the display screen and the connection link to the cloud storage archive. Philips offers the system for a monthly subscription price of $199, with both linear and phased array transducers.

Turning a consumer-grade smartphone into an ultrasound system provides hospitals, urgent care centers and doctor’s offices with a highly flexible point-of-care solution with a low total cost of ownership. The Lumify app can perform scans of the gall bladder, abdomen and lungs, in addition to having OB/GYN, vascular, superficial, musculoskeletal and soft tissue functionality.

Fujifilm Sonosite took a different route for handheld systems, introducing the dedicated iViz ultrasound system at RSNA 2015. While users can perform a number of different exams with vibrant color flow images on the high-resolution, 7-inch display touch screen, acquisition is only part of the emphasis: iViz is enabled for full bi-directional communication with the electronic medical record (EMR) through Fuji’s Synapse VNA (vendor neutral archive). This means the device can populate patient data from the EMR as well as send reports with just a few taps. “Their approach is it’s not just a smart device, it’s a medical device,” said Brubaker.

While the future of handheld ultrasound looks bright, according to Brubaker, the technology is still in its infancy, so time will tell what its role will be. “We know it’s going to be popular and should adapt well, but we’ll see to what extent it becomes part of the market,” he said.

Handheld systems are just one iteration of the new touch-enabled ultrasound units; many are still cart-based while still offering increased flexibility. Carestream Health, for example, introduced the Touch Prime and Touch Prime XE, which received U.S. Food and Drug Administration (FDA) clearance last June. Both versions feature a sealed, all-touch control panel that combines the speed and flexibility of a soft user interface with the tactile feedback of traditional keys. Etched markings for primary controls help the user easily locate key functions without looking away from the display monitor.

Mindray’s TE7 touch-enabled ultrasound, introduced last July, offers similar benefits and functionality to the other POC systems. The tablet-style device attaches to a slim-profile cart, allowing easy mobility. Users can choose from several different exam presets with a single touch, including cardiovascular capabilities like continuous wave (CW) Doppler, and a series of emergency department-specific exams. A variety of compatible transducers further expand the TE7’s capabilities, including a transducer for transesophageal echo (TEE) exams. Image optimization is also a one-touch function.

Access the most current version of the ITN Ultrasound Systems Comparison Chart (www.itnonline.com/content/ultrasound-systems). This will require a login, but it is free and only takes a minute to complete the form.

Watch the VIDEO: Trends in Ultrasound at RSNA 2016