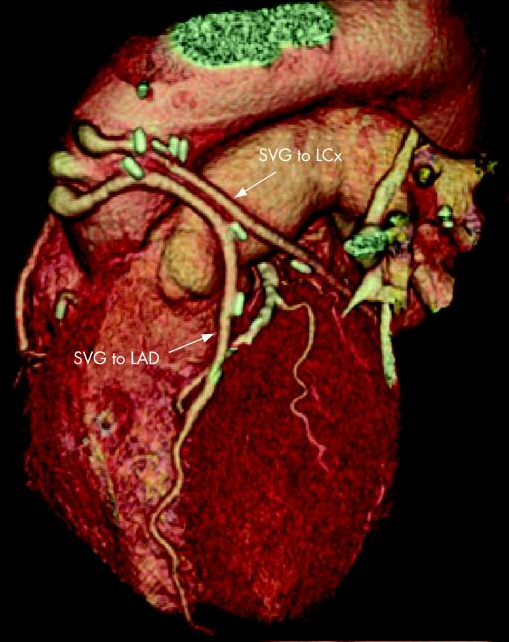 November 22, 2013 — A 320-detector computed tomography (CT) scanner that shows both anatomy within coronary arteries and blood flow can accurately sort out which people need an invasive procedure to identify coronary blockages, according to an international study. The researchers say their findings could potentially save millions of people worldwide from having an unnecessary cardiac catheterization. The study, known as CORE 320, involved 381 patients at 16 hospitals in eight countries. The European Heart Journal published an article on the results online Nov. 19.

In the study, participants were evaluated with a 320-detector CT and conventional tests that are widely used today. The researchers say 91 percent of those in whom the CT scan ruled out blockages would not have required invasive treatment such as stenting or bypass surgery. So those patients, none of whom had a history of coronary artery disease (CAD), could have avoided invasive tests because for them the CT scan was just as accurate in determining who would be a good candidate for revascularization as the conventional tests.

"Ours is the first prospective, multicenter study to examine the diagnostic accuracy of CT for assessing blockages in blood vessels and determining which of those blockages may be preventing the heart from getting adequate blood flow," said Joao Lima, M.D., professor of medicine and radiology, Johns Hopkins University School of Medicine and senior author of the study. "We found an excellent correlation in results when we compared the 320-detector CT testing with the traditional means of assessment using a stress test with imaging and cardiac catheterization."

The study findings, says Lima, would apply to people who have chest pain but not a heart attack based on electrocardiograms (ECGs) and other evidence. Many people in that situation are sent to a cardiac catheterization laboratory for further evaluation with angiography. About 30 percent of people who have such catheterization are found to have minimal disease or no blockage requiring an intervention to open the vessel with a stent or bypass the vessel through surgery.

The 381 patients who completed the study had traditional single-photon emission computed tomorgraphy (SPECT) tests and invasive angiography. Lima says SPECT shows reduced blood flow to the heart without indicating the number or specific location of blockages.

Study participants also had two types of tests with a noninvasive 320-detector CT scanner. In the first CT test, the scanner was used to see the anatomy of vessels to assess whether and where there were blockages — a computed tomography angiography (CTA). Then, in a second CT test with the same machine, patients were given a medication that dilates blood vessels and increases blood flow to the heart in ways similar to what happens during a stress test — a computed tomography perfusion (CTP).

"We found that the 320-detector CT scanner allowed us to see the anatomy of the blockages and determine whether the blockages were causing a lack of perfusion to the heart," said Carlos Rochitte, M.D., cardiologist, Heart Institute (InCor), University of São Paulo Medical School, Brazil and lead author of the study. "We were therefore able to correctly identify the patients who needed revascularization within 30 days of their evaluation."

"Many patients are sent for an angioplasty when they may not need it. Our ultimate goal is to have more certainty about which patients having chest pain — without evidence of a heart attack — need an invasive procedure to open an arterial blockage," said Richard George, M.D., cardiologist, associate professor of medicine, Johns Hopkins University School of Medicine and a co-author of the study.

George developed the CTP method with Lima. "The CTP test added significant information about the patients' conditions and boosted our ability to identify those whose blockages were severe enough to reduce blood flow to the heart," added George.

The 320-detector CT provides a complete picture of the heart by making just one revolution around the body. The researchers say the two tests combined (CTA and CTP) still produce less radiation than a scan with the 64-detector CT scanner in widespread use.

"In our study, the amount of radiation exposure to patients from the two 320-detector CT tests was half the amount they received as a result of the traditional evaluation methods — the angiogram and nuclear medicine stress test combined," said Lima.

The researchers say they will continue to follow the patients in the study for five years, looking for any heart-related events such as heart attacks, as well as hospital admissions, procedures or operations.

"CORE320 confirms the results of numerous single center studies performed by investigators throughout the world that myocardial CT perfusion imaging, when added to the coronary CT angiogram, provides incremental improvement in the diagnosis of flow limiting coronary artery disease," said George. "This study demonstrates that cardiac CT is a comprehensive diagnostic tool that can define coronary plaque, plaque burden, anatomic stenosis and the hemodynamic significance of coronary artery disease."

George also said this should affect the practice of cardiac CT.

"We now have evidence from numerous single center studies and now two multicenter studies that myocardial CTP accurately diagnosis myocardial ischemia," added George. "In the setting of an abnormal coronary CTA, myocardial perfusion imaging may be added to assess the hemodynamic significance of stenosis".

With regards to CT perfusion, these next steps will be considered for the future: