2018 Set to be Strong for the Global Ultrasound Market 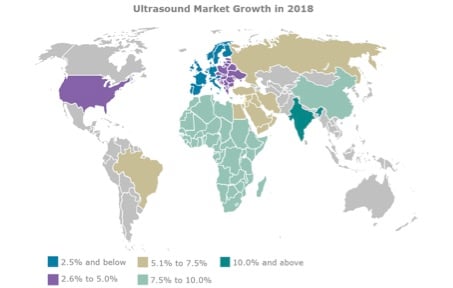 After a year of mixed fortunes, the global ultrasound market is set for a strong year in 2018. The three major geographic markets of Europe, the Middle East and Africa (EMEA), America and Asia are all forecast to grow faster than in 2017, driving a global growth rate of 5.1 percent, notably higher than the 3.2 percent growth seen last year. The main regional growth trends are discussed below.

The U.S. market was subdued in 2017 due to a combination of reduced government spending and delayed purchasing decisions in the private sector. The Trump administration’s plans to repeal the Affordable Care Act (ACA) led to uncertainty in the market and many health providers delayed major purchase decisions. By the third quarter of 2017 it became clear that the Republicans didn’t have enough support for the repeal bill, restoring a degree of confidence with health providers. Purchasing picked up in the later part of the year, and pent-up demand is expected to drive growth of 3-4 percent in 2018.

Of the traditional markets (radiology, cardiology and OB/GYN), the highest growth is forecast for radiology, which was the hardest hit in 2017 with a double-digit decline in sales the first half of the year. Cardiology and OB/GYN were less impacted by the prospect of ACA repeal and these markets are forecast to grow only slightly faster in 2018 than in 2017. Point-of-care (POC) remains a higher growth market, but the annual growth rate has slowed in recent years as the market matures.

The U.S. POC ultrasound market is forecast to grow by around 4-5 percent in 2018. The more widespread availability of ultra-portable handhelds is expected to provide a boost to the POC market, particularly for the emergency medicine segment.

LATAM: Return to Growth Driven by Rebound in Brazil

While the Brazilian economy is gaining momentum, political instability remains and continued structural reforms are by no means a certainty. Although the outlook for the Brazilian ultrasound market is more optimistic than in recent years, be prepared for volatility.

The Western European economy is on track to grow at its fastest pace for several years. Coupled with several large regional tenders that are expected this year, the ultrasound market is forecast to see a slight uptick in demand. That said, the market is largely saturated, and the outlook is for low single-digit growth.

As was the case for the U.S., higher growth is forecast for the POC ultrasound market than the traditional markets. The POC market is forecast to grow slightly faster than in the U.S., as the European market is less developed with more room for growth.

The Russian ultrasound market is in recovery mode after double-digit declines in the last few years, with the recovery driven by increased government spending on the back of rising oil and gas prices and an expanding private sector. The market is forecast to grow at a high single-digit rate this year. Outside of Russia, there are limited growth opportunities in the Eastern European region. With reduced levels of EU investment for healthcare projects, the market is expected to grow slower than in previous years, albeit at a slightly faster rate than the Western European market.

Turkey continues to represent a growth opportunity in the region, with growth driven by the Turkish government’s major reform initiative to transform its healthcare system into a universal health coverage model. The government aims to open five city hospitals in 2018, with a combined capacity of around 8,000 beds. Much of the economic growth in recent years has been fuelled by foreign investment and the healthcare reform has largely been financed by public-private partnerships (PPPs). Political and social instability remain a serious threat to the longer-term growth prospects of the Turkish market and 2018 is expected to be the peak year for growth in the ultrasound market.

In Africa, consistent economic growth, increased urbanization, a growing middle class and massive population growth will drive demand for ultrasound equipment. The market is forecast to grow at a high single-digit rate in 2018. The increasing availability of value ultrasound systems with improved image quality is fuelling growth in the African market.

The Indian ultrasound market is forecast to grow at a double-digit rate in 2018, buoyed by the government’s efforts to expand healthcare coverage, increasing private sector spending on healthcare and a growing medical tourism industry. In the government’s Union Budget 2017, the overall health budget was increased by 22 percent, although most of the increase was targeted at human resources and medical education rather than infrastructure and equipment. With India’s population predicted to surpass that of China’s around the year 2024, the longer-term prospects for the Indian ultrasound market are also encouraging.

The Chinese economy performed better than expected in 2017, but is expected to cool in 2018. However, sustained investment in healthcare reform and an expanding private healthcare sector are expected to drive high single-digit growth for the ultrasound market. The relaxation of the single child policy will continue to be a major growth driver in the women’s health segment.

With an improved growth outlook for all three major regions (EMEA, America and Asia), 2018 is forecast to be a strong year for the global ultrasound market. Although the annual growth rate is expected to gradually cool in the following three years, the expanding use of ultrasound across many medical specialties will ensure the market continues to grow at a mid-single-digit rate in the years ahead.  itn 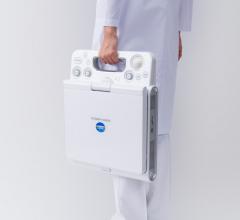 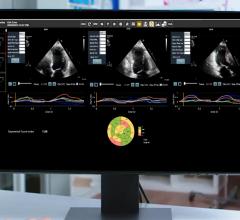 Dia's LVivo artificial intelligence software can help automate many features of echocardiograms to speed workflow and aid novice users. The software is now integrated into the Konica Minolta Exa PACS. 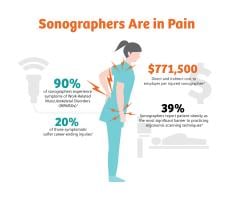 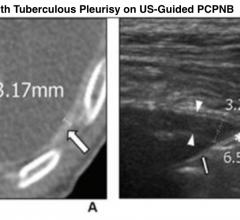 Enhanced axial CT (A) shows diffuse pleural thickening (arrow) with a maximum thickness of 3.17 mm. US image for the corresponding lesion on CT (B) shows diffuse pleural thickening (arrowheads) with a maximum thickness of 3.25 mm. The needle pathway length, measured as the needle length through the pleural lesion, was 6.54 mm (asterisk). Pleural puncture angle (exact value not indicated) is depicted as the angle between the outer line of the pleura and the biopsy needle (thin arrow). 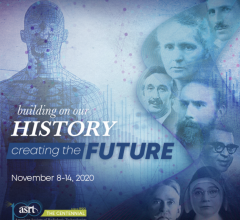 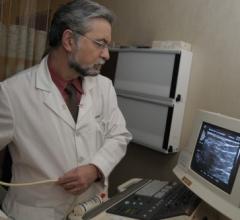 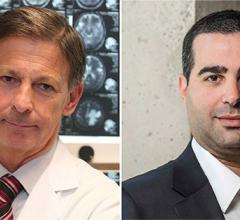 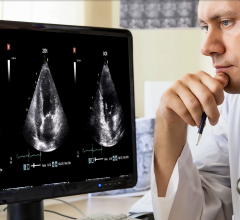 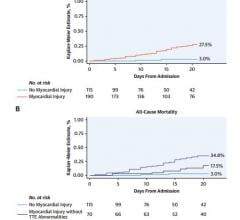 Kaplan-Meier curves for all-cause mortality in patients with versus without myocardial injury (Panel A) and in patients with versus without myocardial injury according to the presence or absence of major echocardiographic abnormalities (Panel B). *Includes wall motion abnormalities, global left ventricular dysfunction, diastolic dysfunction, right ventricular dysfunction and presence of pericardial effusion. Event rates are censored at 20 days from hospital admission. Images courtesy of Mount Sinai Health System