Software suitable for use with digital mammography and digital breast tomosynthesis 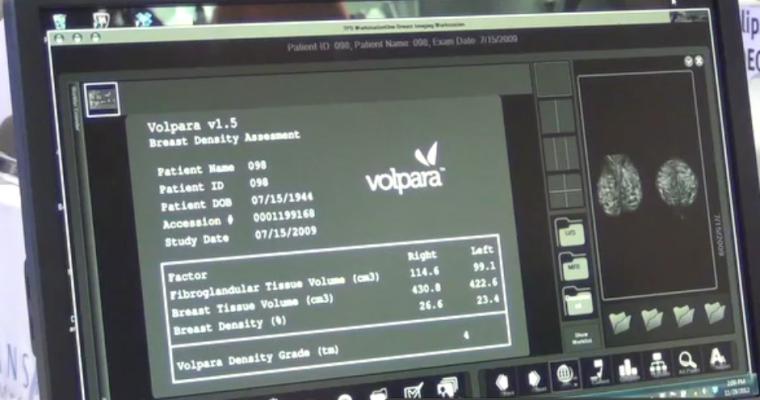 December 19, 2014 – Volpara Solutions announced the launch of the VolparaDensity version 3.0 breast density assessment tool at the 100th annual meeting of the Radiological Society of North America (RSNA), Nov. 30-Dec. 5 in Chicago. Available clinically for use with digital breast tomosynthesis datasets from multiple manufacturers, the system is already in use at Peninsula Diagnostic Imaging in San Mateo, Calif., and Santa Barbara Women’s Imaging in Santa Barbara, Calif.

A digital breast tomosynthesis exam, sometimes called a 3-D mammogram, is performed similarly to a traditional mammogram where the technologist compresses the breast and acquires images from different angles. Tomosynthesis is a multi-view mammography technique where each of the individual tomosynthesis projections acquired is a low dose, 2-D projection mammogram.

“We screen patients with dense breasts with 3-D tomosynthesis while women with fatty breasts continue to get conventional 2-D digital mammography because of the lower dose. We are excited to have the option of providing objective, volumetric breast density for all of our patients as the ability to provide consistent and accurate breast density values is critical to proper patient management. Breast density assessment should be the same no matter if the image was acquired using 2-D or 3-D.  It is, after all, the same breast, so it is very reassuring that VolparaDensity has been highly correlated between mammography and tomosynthesis,” said Susan Marks, M.D., director of breast imaging at Peninsula Diagnostic Imaging.

The VolparaDensity software, which has been in clinical use since 2010, was developed to be suitable for use with both digital mammography and digital breast tomosynthesis data from any manufacturer. It uses the same algorithm to process both the acquired tomosynthesis projections and the raw data of a conventional 2-D mammogram,  and also reduces the challenges of visually determining breast density based on a review of tomosynthesis slices and synthetic 2-D images (C-View from Hologic, V-Preview from GE) and enables consistent density assessments based on each patient’s actual breast tissue composition.

VolparaDensity is in use at breast imaging centers worldwide to help radiologists objectively assess density from both digital mammography and tomosynthesis images and to determine which women would benefit from additional screening. Highly correlated to breast magnteic resonance (MR) assessments, VolparaDensity automatically generates an objective measurement of volumetric breast density correlated to the American College of Radiology (ACR) breast density categories.