Uterine Fibroid Embolization Safer and as Effective as Surgical Treatment 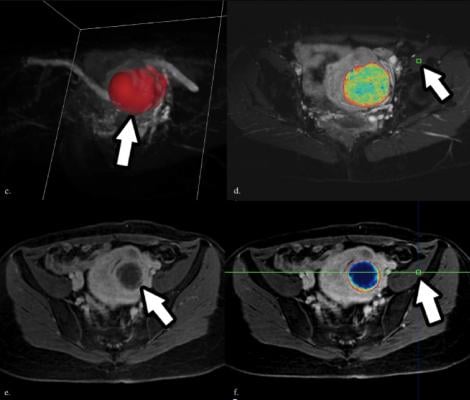 This image is used with permission from the paper "Three-Dimensional Quantitative Assessment of Uterine Fibroid Response after Uterine Artery Embolization Using Contrast-Enhanced MR Imaging." The paper can be viewed here: https://www.ncbi.nlm.nih.gov/pubmed/2563875

UFE is a minimally invasive treatment for uterine fibroids that is less painful, preserves the uterus and allows women to get back to their lives sooner than surgical options. However, past research suggests U.S. women, a majority of whom will experience uterine fibroids by age 50, are largely unaware of UFE despite more than 30 years as an evidence-based treatment.

“Women have options for treating their uterine fibroids. UFE and myomectomy are procedures with similar efficacy and durability for treating fibroids, but UFE has fewer complications and shorter hospital stays,” said Jemianne Bautista-Jia, M.D., radiology resident at Kaiser Permanente and lead author of the study. “There are important factors women should consider when choosing between the procedures. These factors include risk of bleeding, possibility of infections, and recovery time.”

In the retrospective cohort study, researchers analyzed treatment outcomes of 950 uterine fibroid patients from Jan. 1, 2008 through Dec. 31, 2014. Half of the patients underwent UFE, a non-surgical treatment that eliminates the blood supply to fibroids, causing them to shrink or disappear. The other half were treated surgically through myomectomy, a procedure that removes existing fibroids.

After an average seven-year follow up, the study found that women who underwent myomectomy had a higher rate of postprocedural complications, including a 2.9 percent rate of blood transfusion, which was significantly higher than the 1.1 percent rate for those who were treated using UFE. Patients in both treatment groups demonstrated a significant increase in hemoglobin one year after the initial procedure due to reduced bleeding. The two methods were comparably effective based on the rate at which secondary interventions — including UFE, myomectomy and hysterectomy — were needed. Second interventions were completed in 8.6 percent of women who received an initial UFE compared to 9.9 percent for women who initially underwent a myomectomy.

This study also showed similar rates of miscarriage for women who underwent either UFE or myomectomy. Future research should explore the impact of all uterine-sparing fibroid procedures on pregnancy, which remains still poorly understood.

A uterine fibroid (leiomyoma) is a noncancerous tumor that occurs in the muscle cells of the uterus. These growths do not spread to other regions of the body and are typically not dangerous. While some women do not experience symptoms, others have very heavy and prolonged bleeding that can be debilitating, as well as pelvic pain and abdominal enlargement.

Treatments for uterine fibroids can range from monitoring the fibroids or administering medications to relieve the symptoms, to more invasive approaches, such as myomectomy and hysterectomy. UFE falls in the middle of the spectrum of treatment options and is performed through a tiny incision. Using real-time imaging, an interventional radiologist guides a catheter into the uterine arteries and then releases tiny particles to block the blood flow to the fibroid tumors.