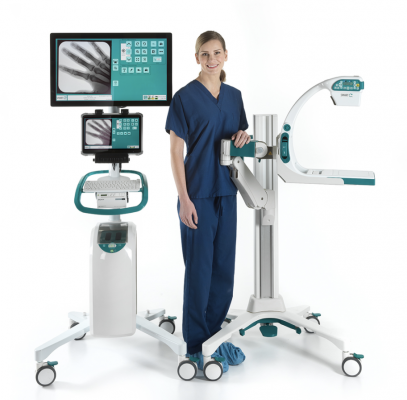 June 1, 2021 — Turner Imaging Systems, a developer of advanced X-ray imaging systems, announced the company has received its CE Mark for its Smart-C Mini C-Arm portable fluoroscopy X-ray imaging device. This will allow the Smart-C, the world’s first highly portable mini c-arm, to be distributed throughout the EU countries as well as the UK. Turner Imaging Systems will expand the launch of the Smart-C into a number of European markets during this 2021 calendar year.

“Securing the CE Mark is a critical regulatory milestone and major step forward in the commercialization and delivery of our innovative Smart-C Mini-C arm fluoroscopic x-ray system into Europe and the Global marketplace,” said Rick White, Vice President of Sales and Marketing for Turner Imaging Systems. “The Smart-C will bring real-time diagnostic point of care imaging to many different health care markets including hospitals, surgery centers, orthopedic clinics, sports teams and the military throughout Europe.”

In the United States, the Smart-C is being deployed in hospitals, ambulatory surgical centers, orthopedic clinics, as well as professional and collegiate sports teams and other places. The battery-powered, 16 lb. Smart-C offers point-of-care imaging, allowing it to be taken to the bedside of a patient with ease. The design also provides surgeons greater flexibility and superior imaging in a cord-free package.

The Smart-C is currently being distributed throughout the USA via distribution channels which includes Siemens Healthineers, one of the largest medical imaging companies in the world. Discussions with distributors in the EU are already in progress. Turner Imaging Systems will also be launching the Smart-C in other countries, which will be announced later this year.