Theranostic PET Takes on Both Ovarian and Prostate Cancer

June 12, 2015 - A first-in-human study shows how a powerful new drug finds and attaches itself to the ovarian and prostate cancer cells for both imaging and personalized cancer treatment. Study results were revealed at the 2015 annual meeting of the Society of Nuclear Medicine and Molecular Imaging (SNMMI).

The targeted aspect of the imaging agent, called I-124 PEG-AVP0458, is a small protein (avibody) linked to polyethylene glycol (PEG) chains. The drug compound is then labeled with the radionuclide iodine-124. Drugs like PEG-AVP0458 are known as theranostic agents, because they can be used in both diagnostic and therapeutic contexts with the aid of positron emission tomography (PET). PET scanners can identify tumor sites by detecting radioactive particles that have hitched a ride with the anti-cancer antibodies following injection. A stronger radionuclide or toxin can also be attached to the avibody to destroy those tumors while protecting nearby healthy tissues.

"Avibodies are a novel, small form of antibody that still retains a high affinity for cancer antigens," said Andrew Scott, M.D., lead author for the multi-site study and a researcher from the department of nuclear medicine and Centre for PET at Austin Hospital, Melbourne, Victoria, Australia. "The avibody we have developed targets prostate and ovarian cancer and has great potential as a theranostic agent for both imaging and therapy."

This study exemplifies the versatility of PEG-AVP0458 for delivering a range of radionuclides or other cancer-fighting drugs for the treatment of relapsed and metastatic ovarian and prostate cancer. Results of the study demonstrated how six patients - five men with prostate cancer and one woman with ovarian cancer, all ranging in age from 62 to 85 years of age - were imaged safely with variable doses of I-124 PEG-AVP0458. PET images highlighted areas of increased agent binding in metastatic tumors of the liver and lymph nodes within a day of injection.

This drug is still in initial phases of study. Researchers working with Avipep Pty Ltd expect clinical trials to continue over the course of the next three to five years. If approved, PEG-AVP0458 could be added to the existing arsenal for combating prostate and ovarian cancer. 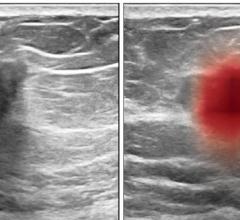 Breast ultrasound images show cancer (at left, as dark spot in center and, at right, in red, as highlighted by a computer). Image courtesy of Nature Communications