New study finds no evidence that gadolinium, an ingredient in contrast media, will harm the brain 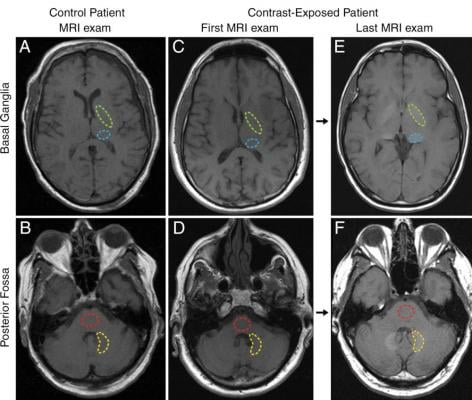 January 11, 2018 — There is no evidence that accumulation in the brain of the element gadolinium speeds cognitive decline, according to a new study presented at the annual meeting of the Radiological Society of North America (RSNA), Nov. 26-Dec. 1 in Chicago.

Gadolinium-based contrast media were introduced in 1988 as a means of enhancing magnetic resonance imaging (MRI) and are commonly used today. The contrast agent is injected into the patient's bloodstream and eliminated from the body through the kidneys.

"It's estimated that approximately 400 million doses of gadolinium have been administered since 1988," said the study's lead author, Robert J. McDonald, M.D., Ph.D., neuroradiologist at the Mayo Clinic in Rochester, Minn. "Gadolinium contrast material is used in 40 to 50 percent of MRI scans performed today."

Scientists previously believed gadolinium contrast material could not cross the blood-brain barrier, the semipermeable membrane that selectively filters materials from the bloodstream from entering extracellular fluid in the brain and central nervous system. However, recent studies, including one from McDonald and colleagues, found that traces of gadolinium could be retained in the brain for years after MRI.

On Sept. 8, 2017, the U.S. Food and Drug Administration (FDA) recommended adding a warning to labels about gadolinium retention in various organs, including the brain, for gadolinium-based contrast agents used during MRI. The FDA highlighted several specific patient populations at greater risk, including children and pregnant women.

Still, very little is known about the health effects, if any, of gadolinium that is retained in the brain.

For this study, McDonald and colleagues set out to identify the neurotoxic potential of intracranial gadolinium deposition following intravenous administration of gadolinium-based contrast agents during MRI.

The researchers used the Mayo Clinic Study of Aging (MCSA), the world's largest prospective population-based cohort on aging, to study the effects of gadolinium exposure on neurologic and neurocognitive function.

All MCSA participants underwent extensive neurologic evaluation and neuropsychological testing at baseline and 15-month follow-up intervals. Neurologic and neurocognitive scores were compared using standard methods between MCSA patients with no history of prior gadolinium exposure and those who underwent prior MRI with gadolinium-based contrast agents. Progression from normal cognitive status to mild cognitive impairment and dementia was assessed using multistate Markov model analysis.

The study included 4,261 cognitively normal men and women, between the ages of 50 and 90 with a mean age of 72. Mean length of study participation was 3.7 years. Of the 4,261 participants, 1,092 (25.6 percent) had received one or more doses of gadolinium-based contrast agents, with at least one participant receiving as many as 28 prior doses. Median time since first gadolinium exposure was 5.6 years.

After adjusting for age, sex, education level, baseline neurocognitive performance and other factors, gadolinium exposure was not a significant predictor of cognitive decline, dementia, diminished neuropsychological performance or diminished motor performance. No dose-related effects were observed among these metrics. Gadolinium exposure was not an independent risk factor in the rate of cognitive decline from normal cognitive status to dementia in this study group.

"Right now there is concern over the safety of gadolinium-based contrast agents, particularly relating to gadolinium retention in the brain and other tissues," McDonald said. "This study provides useful data that at the reasonable doses 95 percent of the population is likely to receive in their lifetime, there is no evidence at this point that gadolinium retention in the brain is associated with adverse clinical outcomes."

This paper is the winner of the Kuo York Chynn Neuroradiology Research Award.

VIDEO: How Serious is MRI Gadolinium Retention in the Brain and Body?