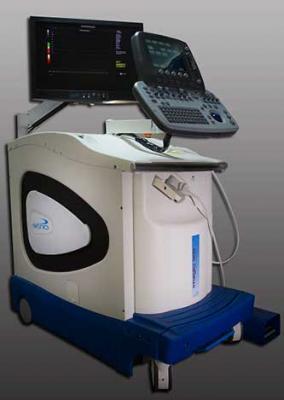 The 100-subject pilot study was conducted as the initial part of a larger U.S.-based, multicenter PIONEER pivotal study of over 2,000 subjects. The PIONEER study is being conducted to demonstrate the ability of the Imagio OA breast imaging system to downgrade BI-RADS (Breast Imaging-Reporting and Data System) scores. Specifically, the study is investigating whether masses originally scored BI-RADS (BR) 4a or 4b (in which a suspicious abnormality is discovered and a biopsy is recommended) could be downgraded to either BR 3 (probably benign, <2 percent likelihood of malignancy with short-interval follow-up recommended) or 2 (benign) and if masses coded BR 3 could be downgraded to 2.

Seven independent breast radiologist readers (IRs) and an expert radiologist (ER) trainer blindly assessed 102 masses from the pilot study cases using only Imagio OA images. Among these subjects, there were 75 biopsied masses (39 benign, 36 malignant). Gray-scale ultrasound images were taken with the Imagio system's conventional ultrasound immediately prior to the OA exam. These images were designated the internal ultrasound control (IUC). Later, the IRs assigned a BR score to these images.

"Downgrading benign masses classified as BR 4b (moderate suspicion), 4a (low suspicion) and 3 without missing cancers is an unmet need that the Imagio OA breast imaging system can potentially help address," said Erin Neuschler, M.D., Northwestern Medicine radiologist, assistant professor of radiology at the Northwestern University Feinberg School of Medicine and the co-principal investigator of the PIONEER Study. "If these pilot findings are verified after the completion of the multicenter PIONEER Study, we will have confirmation that the Imagio OA breast imaging system could help women not only avoid biopsy procedures but also multiple short interval follow-up ultrasound exams over two years."

The Imagio OA breast imaging system was designed to identify the two functional hallmarks of cancer: the presence of abnormal blood vessels (tumor angiogenesis) and the relative reduction in oxygen content of blood that occurs in cancer compared to benign masses and normal tissues. The technology used by the Imagio system is non-invasive and does not require patient exposure to contrast agents, ionizing radiation (X-ray) or radio-isotopes, which are required for other modalities that are capable of functional imaging, including magnetic resonance imaging (MRI) or positron emission tomography (PET).