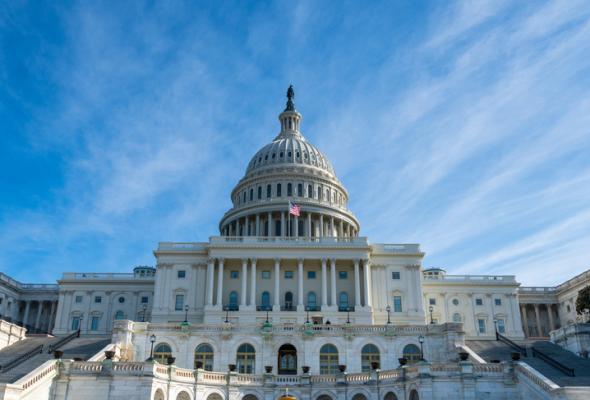 October 22, 2021 — Eighty-five members of Congress have joined together to issue bipartisan, bicameral oversight letters to the Centers for Medicare and Medicaid Services (CMS) that call on the Agency to scale back severe cuts to radiation therapy services in the proposed Radiation Oncology Model (RO Model) and 2022 Medicare Physician Fee Schedule (MPFS). Without action from CMS, the radiation oncology community will face estimated cuts of $300 million starting January 1, 2022, jeopardizing patient access to care.

"Now is not the time for Medicare to force cutbacks in cancer treatment," said Thomas Eichler, MD, FASTRO, Chair of ASTRO's Board of Directors. "ASTRO is overwhelmed to see so many members of Congress stand up in a bipartisan manner for radiation oncology clinics and patients. We are grateful for their leadership, and we hope President Biden's administration will agree to stop these cuts and support radiation oncology's role in ending cancer as we know it."

The letters echo concerns from the American Society for Radiation Oncology (ASTRO) and other radiation oncology stakeholders that the payment cuts will threaten equitable access to high-quality cancer care, especially in rural and underserved communities, and will place an undue burden on medical providers still recovering from the effects of the COVID-19 public health emergency. Analyses of CMS' estimated impact data for the RO Model show that 72% of hospital outpatient departments and 62% of physician group practices that will be required to participate in the RO Model will face payment cuts.

The letters also highlight how the proposed cuts will severely impact clinics that serve predominantly racial and ethnic minority communities and could exacerbate cancer disparities affecting these patients. Specific reforms called for by these members of Congress include reducing the RO Model's excessive discount factor, not penalizing providers in the 2022 MPFS and introducing a Health Equity Achievement in Radiation Therapy (HEART) payment in the RO Model to support "wraparound" services such as patient care navigation that are designed to reduce health care disparities.

A group of 18 senators led by the Senate Finance Committee's longstanding supporters of radiation oncology wrote, "We are concerned that devaluing [radiation therapy] services could have chilling effects on patient access to life-saving care and urge CMS to mitigate the impact on radiation oncology providers." They also emphasized that "We recognize the valuable role radiation therapy plays in meeting the needs of oncology patients and are concerned these proposed cuts could jeopardize access to high-quality treatment." Read the letter here.

The letter from 67 members of the House noted that, "Emerging from COVID-19, radiation oncologists are struggling to treat patients that missed screenings and now require more complex treatments for more advanced cancers," but that the extreme cuts "threaten the ability of patients, particularly underserved populations, to receive state-of-the-art care close to home." The representatives said they "remain committed to an alternative payment model for radiation therapy services that improves quality, stabilizes reimbursement, and reduces disparities, but we are concerned that these severe cuts create instability and undermine the transition to value-based payment." Read the letter here.

The letter from members of the Congressional Black Caucus, the Congressional Hispanic Caucus, the Congressional Asian Pacific American Caucus and the Congressional Native American Caucus explains that "the impact of the proposed rule could force community-based cancer clinics, many of which serve minority neighborhoods, to close their doors, lay off staff, and limit Medicare patients." It continues, "The RO Model represents a new opportunity to address health disparities in radiation therapy. Unfortunately, the proposed combined payment cuts undermine the promise of the RO Model and the chance to improve health equity," and that, "Finalizing these proposed CMS rules would undermine the Administration's ongoing efforts to eradicate cancer, and disproportionally impact vulnerable communities that already face poor access to cancer screening and care." The caucus letter will be sent to Department of Health and Human Services (HHS) Secretary Xavier Becerra as well as CMS Administrator Brooks-LaSure in the next few days.

If CMS does not make meaningful changes when the Agency issues final rules in coming weeks, ASTRO intends to work with these Congressional champions on legislation to address these payment cuts before the year ends.