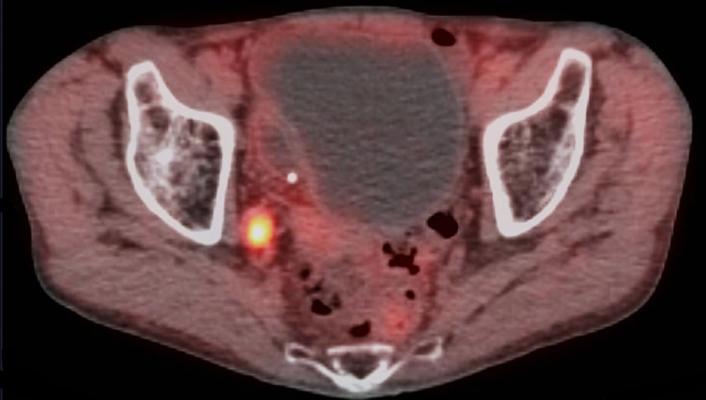 May 25, 2021 — Blue Earth Diagnostics, a Bracco company and recognized leader in the development and commercialization of innovative PET radiopharmaceuticals, is pleased to share news of the publication of a study from researchers at Winship Cancer Institute of Emory University (Winship) evaluating Axumin (fluciclovine F 18) PET imaging in men with recurrent prostate cancer. The randomized, prospective study showed that Axumin-guided post-prostatectomy radiation therapy increased biochemical event-free survival rates in men with recurrent disease. Among 165 patients whose prostate cancer had returned following surgical removal of their prostate, 75.5% whose treatment integrated Axumin PET imaging were event-free after three years, compared to 63% for whom only conventional imaging techniques were used to plan treatment. The increased event-free survival rate persisted after four years of follow-up, at 75.5% vs. 51.2%, respectively. Provider-reported genitourinary or gastrointestinal side effects were similar between the two study groups. Axumin, a novel amino acid-based radiopharmaceutical, is FDA-approved for PET imaging in men with suspected prostate cancer recurrence based on elevated blood prostate specific antigen (PSA) levels following prior treatment.

“We are extremely pleased that these exciting results, from Emory University’s independent study of how PET imaging with Axumin can influence radiation therapy treatment outcomes, have been made available to the physician community through publication in the well-respected medical journal, The Lancet,” said David Gauden, D. Phil., President of R&D and CSO of Blue Earth Diagnostics. “We sincerely congratulate the researchers on the design and execution of this important study. Axumin was invented at Emory to enable PET visualization of increased amino acid transport that occurs in prostate and other cancers. Blue Earth Diagnostics subsequently developed and advanced Axumin through U.S. and EU approvals for PET imaging of recurrent prostate cancer. Axumin PET imaging has informed healthcare decisions for more than 125,000 men with recurrent prostate cancer across the United States, where it is available at 1,300 imaging centers and widely reimbursed. In Europe, Axumin availability and reimbursement continue to expand, with additional access anticipated this year. The commercial success of Axumin has set the stage for applying Blue Earth’s proven expertise in developing and commercializing innovative radiopharmaceutical technology to new products and indications. We are committed to improving the lives of patients through innovative diagnostic solutions that empower the evolution of care for men with recurrent prostate cancer, and we look forward to helping even more patients in the future.”

“The decision to offer post-prostatectomy radiation is complex, because conventional imaging can leave unanswered questions on the best approach for treatment planning,” said co-principal investigator Jani. “This research has found that integrating advanced PET imaging using 18F-fluciclovine into the treatment planning process allows us to do a better job of selecting patients for radiation therapy, guiding radiation decisions and planning, and ultimately, keeping our patients’ cancer under control. The group getting treatment guided by 18F-fluciclovine PET had a ‘cancer control rate’ of 75.5% at both three and four years; the group receiving treatment guided by conventional imaging had a ‘cancer control rate’ of 63% at three years and 51.2% at four years.”

“The question that we wanted to answer in this study was whether the treatment plan effect informed by 18F-fluciclovine PET imaging had a positive effect in the lives of patients,” said Schuster,. “The EMPIRE-1 trial allowed us to determine whether using 18F-fluciclovine PET imaging influences patient outcomes for the better, and the significant results confirm that it does."

About the EMPIRE-1 trial

The EMPIRE-1 (Emory Molecular Prostate Imaging for Radiotherapy Enhancement) trial (NCT01666808) study was a single-center-open-label, Phase 2/3, randomized controlled trial. It enrolled 165 patients (median age 61 years; inter-quartile range 55-68 years) whose cancer recurred after having undergone prostatectomies, but who later showed abnormal PSA blood test scores, indicating that their cancer had returned. All patients underwent conventional imaging (bone scan, CT or MRI) for initial treatment planning. Patients were then randomized 1:1 into two groups: the first receiving radiation therapy based on the initial treatment plans; the second receiving 18F-fluciclovine PET scans with treatment re-evaluated based on those findings. After three years, the study showed patients who were treated based on incorporating the 18F-fluciclovine PET imaging results had a higher event*-free survival rate (p=0.003), which persisted after four years (75.5% in the 18F-fluciclovine PET imaging arm, versus 51.2% in the conventional arm; p<0.0001). Provider-reported genitourinary or gastrointestinal side effects were similar between the two study groups.

*Events defined as biochemical or clinical recurrence or progression, or initiation of systemic therapy.