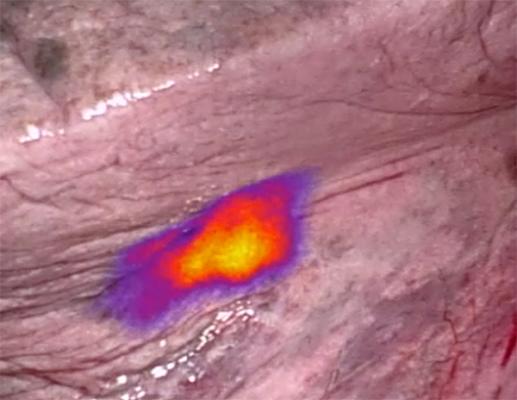 February 6, 2020 — On Target Laboratories Inc., a privately held biotechnology company developing the use of Purdue University-discovered fluorescent markers to target and illuminate cancer during surgery, has announced the results of a multi-institutional Phase 2 clinical trial in which outcomes were improved for 26 percent of patients undergoing pulmonary resection for non-small-cell lung cancer (NSCLC).

The results of the treatment, called OTL38, were presented at the 56th annual Meeting of the Society of Thoracic Surgeons (STS), held last month in New Orleans, and were featured in a plenary session as a J. Maxwell Chamberlain Memorial Paper for General Thoracic Surgery, considered to be among the top-rated abstracts at STS. The treatment was developed in the Purdue laboratory of Philip Low in the Purdue Institute of Drug Discovery. Low is the Presidential Scholar for Drug Discovery and Ralph C. Corley Distinguished Professor of Chemistry-Biochemistry in the Department of Chemistry. Currently, there are 288 clinical trials performed or in process using Purdue-developed medical treatments at 4,841 sites across the globe.

"Our goal is to provide surgeons with new technology to help them provide a more complete resection to more patients. This gives patients the best chance of improved outcomes after surgery," said Christopher Barys, president and CEO of On Target Laboratories.

Lung cancer is the leading cause of cancer-related deaths in the United States. Pulmonary resection, either a wedge resection, segmentectomy, or lobectomy, is recommended for most patients who have operable stage I-II non-small cell lung cancer. Intraoperative molecular imaging (IMI) — also referred to as fluorescence-guided surgery — may increase the likelihood of a more complete surgical resection, which could translate into increased survival for patients and reduced re-operations or adjuvant treatment for hospitals.

Conducted over 18 months, the study included 92 patients eligible for analysis. There were no drug-related serious adverse events and 24 patients, or 26 percent, were impacted during pulmonary resection, with 8% of patients having a change in their stage due to the use of IMI.

The study showed that IMI improved localization of small and peripheral lesions, which can be difficult for surgeons to identify visually or through manual palpitation, and enabled localization of otherwise unlocalizable lesions in 11 patients, or 12 percent. Further, 10 additional cancers were found in seven patients, or 8 percent. During the Specimen Check Phase, when the surgeon confirms that the nodule is in the specimen and analyzes the margins, surgeons thought all margins were adequate, yet back-table inspection using IMI revealed inadequate margins in eight patients, or 9 percent.

“OTL38 is the first technique that is specific to imaging adenocarcinomas of the lung, which is one of the most common types of invasive lung cancer," said Inderpal (Netu) S. Sarkaria, M.D.,  of the Department of Cardiothoracic Surgery at the University of Pittsburgh Medical Center. "Near-infrared imaging with OTL38 may be a powerful tool to help surgeons significantly improve the quality of lung cancer surgery by more clearly identifying tumors and allowing the surgeon to better see and completely remove them — one of the most vital components in the overall care of patients with this disease.”

Low is a co-founder of On Target and the technology is licensed through the Purdue Research Foundation Office of Technology of Commercialization. The Purdue Institute of Drug Discovery is situated near Discovery Park District, a $1 billion-plus long-term enterprise to support a transformational center of innovation on the western edge of the Purdue University campus. The district includes the Convergence Center for Innovation and Collaboration, where startups, entrepreneurs, innovators and companies can collaborate with Purdue to address global challenges in health, sustainability, IT and space. The district already includes a public airport with a 7,000-foot runway, and partnerships with international companies including Rolls-Royce, Schweitzer Engineering Laboratories and Saab. Visit Discovery Park District.

To date, there have been limited ways for surgeons to confidently assess the location and full extent of cancerous tissue while operating. On Target Laboratories' fluorescent markers are composed of a near-infrared dye and a targeting molecule, or ligand, that binds to receptors overexpressed on cancer cells. These markers illuminate the cancerous lesions, lighting the way for the resection of malignant tissue and enabling surgeons to see and remove more diseased tissue. On Target's first novel compound, OTL38, targets folate receptors commonly found on many cancers, including lung and ovarian cancers. A small single dose of the compound is administered via IV infusion one to 24 hours before surgery, allowing the surgeon to identify malignant tissue during the procedure using the near-infrared camera.