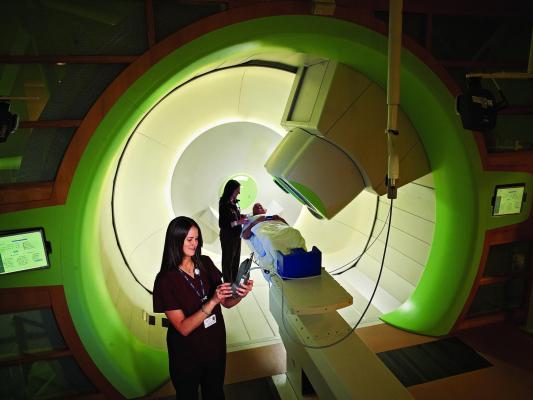 The research was presented at the 57th American Society for Radiating Oncology (ASTRO) annual meeting, along with over 20 other abstracts from faculty and researchers in Penn's Department of Radiation Oncology.

The first study — presented by Pamela J. Boimel, M.D., a resident in the Department of Radiation Oncology, and co-authored by John P. Plastaras, M.D., Ph.D., an associate professor of radiation oncology, and James Metz, M.D., chair of the Department of Radiation Oncology — investigated the use of proton therapy in pancreatic cancer patients whose cancer returned. Local recurrence happens in nearly 25 percent of these patients following other treatments, such as chemotherapy, surgery and radiation, and is associated with a very high morbidity.

Researchers looked at 15 patients with locally recurrent pancreatic cancer who were re-irradiated with proton therapy, 10 of whom were also on chemotherapy (5-fluorouracil or capecitabine-based). The median time since the original conventional radiation was 26.7 months. Most of the patients tolerated the radiation well, with minimal side effects. The median survival was 15 months and overall survival at one year was 71.5 percent. The local-regional progression-free survival and distant-metastatic-free survival at one year was 72 and 63.8 percent, respectively.

This more than doubles the median survival for re-irradiation with stereotactic body radiation therapy (SBRT), which is six to eight months. The median survival in the study also far exceeds the historical survival of patients with unresectable disease treated with chemo alone (about nine months), which is the main treatment modality offered to patients with recurrent pancreatic cancer, the authors reported.

"Our data suggests that pursuing proton re-irradiation may benefit these patients who have no other good treatment choices, and does so with minimal side effects," said Plastaras. "While these results are promising, larger follow-up studies are needed to establish which people with recurrent pancreatic cancer stand to benefit most from this therapy."

Another study — presented by Jill Remick, M.D., a resident in the Department of Radiation Oncology, and co-authored Charles Simone, M.D., an assistant professor of radiation oncology, and Abigail Berman, M.D., an instructor in the Department of Radiation Oncology — provides the first clinical report of proton therapy versus intensity-modulated radiation therapy (IMRT) in the post-operative setting for late-stage, non-small cell lung cancer.

Radiation is typically given to these patients after surgery to remove a tumor; however, studies have shown the toxicity of conventional radiation can outweigh its benefits. Proton therapy appears to be well-tolerated, while maintaining the positive clinical outcomes witnessed with IMRT, the authors report.

A total of 34 patients were part of the clinical trial: Seventeen underwent IMRT, while 17 underwent proton.

Patients who underwent proton and IMRT had similar, excellent short-term outcomes: One-year overall survival and local recurrence-free survival were 85.7 and 94.1 percent for proton and IMRT, respectively. Side effects occurred (two patients had radiation pneumonitis and esophagitis in both sets of patients), but were less severe in the proton group.

A team from Penn Medicine also presented results from a prospective clinical of proton therapy for chordoma and chondrosarcoma. Chordoma is part of the sarcoma family, and occurs in the bones of skull and spine, while chondrosarcoma is a type of bone cancer that begins in cartilaginous tissue. Both are rare, difficult cancers to treat.

Proton therapy, with its ability to deliver high doses of radiation while sparing healthy organs, has emerged as a preferred treatment for these patients. The standard of care is surgery followed by conventional radiation, but that treatment can fail.

For the study — presented by Brian Baumann, M.D., a resident in the Department of Radiation Oncology, and co-authored by Michelle Alonso-Basanta, M.D., Ph.D., an assistant professor of radiation oncology at Penn — the team studied 20 patients with non-metastatic chordoma and chondrosarcoma who underwent proton therapy between 2010 and 2014. Of the patients, 10 had skull base chorodomas, five had sacral chordomas, three had cervical spinal chordomas and two had skull base chondrosarcomas.

The study yielded positive survival outcomes for the patients: Local recurrence-free survival, distant metastases-free survival, and disease-free survival at two years were 92 percent, 95 percent and 87 percent, respectively. All patients were alive at last follow-up in February 2015. Some toxicities were reported in the patients, including fatigue, epistaxis and gastrointestinal issues. That toxicity data is encouraging compared with historical results using conventional radiotherapy, the authors reported.

The researchers also reported that further follow-up is warranted to confirm long-term efficacy and morbidity.

"When the Roberts Proton Therapy Center opened in late 2009, we called for an increased capacity for harder-to-treat cancers, and to open new clinical trials that help pinpoint the best uses of the technology," Metz said. "These studies are prime examples of that mission, providing the field with more data to help establish the effectiveness and clinical benefits of proton therapy in more cancers."