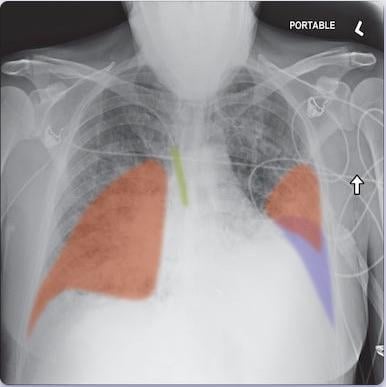 Over the course of a year, ChestEye Quality identified 190 clinically relevant missed findings, 82 of which were potentially missed subtle pulmonary nodules. The majority of nodules in Quality studies are subtle: most are under 15 mm in size, often partially obscured by superposing structures such as ribs/hilar area/heart shadow.

The study was undertaken in Šeškinė (Vilnius) and Kaunas city primary care centers, which provide services to more than 260.000 patients. Outpatient clinics were specifically chosen to trial AI framework in ‘real-world’ conditions, as pulmonary nodules could be identified during routine health checks or as secondary findings.

According to a doctor at Šeškinė polyclinic Rasa Tamasauskiene, ChestEye Quality received positive feedback from the department’s radiologists.

“In a few clicks ChestEye Quality provides a valuable second opinion. This benefits both - the doctor and the patient” - added Rasa Tamasauskiene.

According to the Oxipit CEO Gediminas Peksys, ChestEye Quality merges ‘best of both worlds’ - AI capability to efficiently process vast amounts of studies and identify even the most subtle details and the human medical expertise, critical thinking and impactful decision making.

“In Lithuania 1200 patients are annually diagnosed with lung cancer. According to the pilot study results, a nationwide ChestEye Quality deployment would help to identify up to 20% lung cancer instances per year at a very early stage, significantly improving treatment prognosis and boosting patient life expectancy” - adds Gediminas Peksys.

The pilot project was delivered in partnership with biotechnology company AstraZeneca. The company is a founding member of Lung Ambition Alliance, a partnership of organizations aiming to eliminate lung cancer as a cause of death.

“The pandemic continues to have an impact on cancer screening, diagnosis and access to treatment, particularly affecting people living with lung cancer. That said, we proudly continue important work with partners across the globe to support and reinforce getting patients back to cancer care, including routine cancer screenings, treatment and testing through initiatives like Lung Ambition Alliance. Improved screening performance, boosted by AI capabilities and other advanced technology tools, is the primary step for beginning treatment as soon as possible, leading to a significant improvement in patient outcomes” - says Baltics Country Director at AstraZeneca Daniela Pavlic.