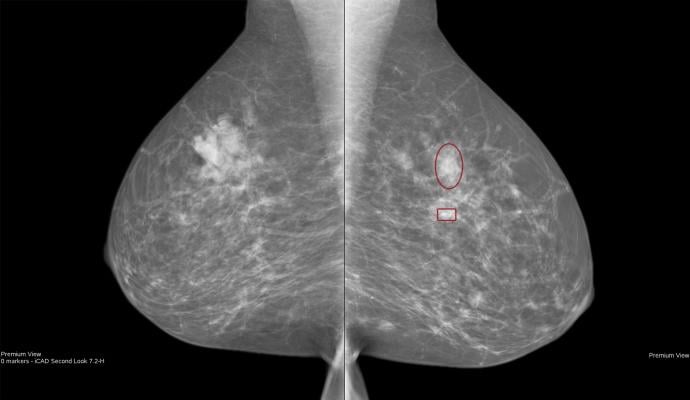 January 4, 2018 — Women with higher body mass index (BMI) face an increased risk of not detecting their breast tumor until it has become large, according to a study presented at the 2017 annual meeting of the Radiological Society of North America (RSNA) in Chicago in November. Researchers said the findings suggest that women with higher BMI may need shorter intervals between mammography screening exams.

BMI is a measure of body fat based on height and weight, with overweight defined as a BMI of 25 or more. High BMI is associated with a number of health risks, including diabetes and heart disease. However, BMI is not considered as part of breast cancer screening guidelines.

For the new study, conducted at Karolinska Institutet in Sweden, researchers set out to identify risk factors associated with tumors not being detected until larger than 2 centimeters (cm), or about the size of a peanut, and to examine the implications for long-term prognosis. The 2-cm size is important because it is one of the parameters used to separate stage I and stage II cancers. In addition, tumor size is known to be strongly associated with prognosis, according to study co-author Fredrik Strand, M.D., radiologist at the Karolinska University Hospital in Stockholm, Sweden.

Strand and colleagues studied 2,012 cases of invasive breast cancer that appeared from 2001 to 2008. The researchers followed the patients until the end of 2015, and looked for how disease progression was related to BMI and breast density.

For cancers detected at screening, both BMI and breast density were associated with having a large tumor at diagnosis. However, for interval cancers, or cancers detected within two years of a normal mammogram, only BMI was linked with having a large tumor. Women with higher BMI had worse prognosis than women with lower BMI among interval cancers. Breast density showed no significant association with disease progression.

"Our study suggests that when a clinician presents the pros and cons of breast cancer screening to the patient, having high BMI should be an important 'pro' argument," he said. "In addition, our findings suggest that women with high BMI should consider shorter time intervals between screenings."

Besides the larger interval cancers, women with high BMI may have other factors that put them at risk for a worse prognosis, including the molecular composition of the tumors and hormone receptor expression levels that make them harder to treat, Strand added.

The study was carried out in Sweden, which has 18- to 24-month intervals between screenings — longer than the 12 months recommended by some U.S. organizations like the American Cancer Society, but not the 24-month screening interval recommended by the United States Preventive Services Task Force (USPSTF). In addition, there are fewer women with high BMI in Sweden than in the United States.

In the near future, Strand intends to look at how breast density is associated with delayed detection. Longer-term, he wants to study artificial intelligence as a way to triage mammographic screening examinations into different pipelines based on the risk of breast cancer and the detectability of a potential tumor.