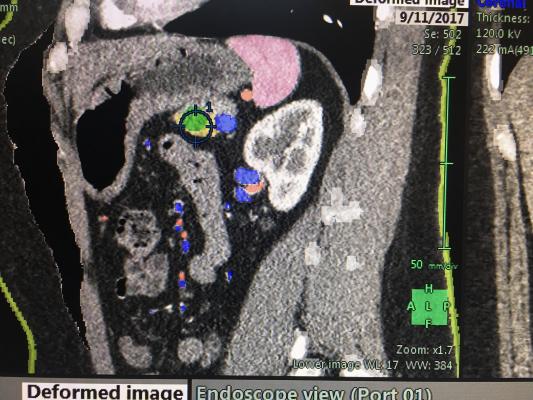 September 5, 2019 — A new clinical guideline from the American Society for Radiation Oncology (ASTRO) provides recommendations on the use of radiation therapy to treat patients diagnosed with pancreatic cancer. Recommendations include when radiation treatments are appropriate, as well as the optimal dosing, timing and fractionation for these treatments. The guideline, which also outlines strategies to prevent and mitigate common side effects of pancreatic radiation therapy, is published online in Practical Radiation Oncology, the clinical practice journal of ASTRO. [1]

Despite being the 11th most common cancer diagnosed among U.S. adults, pancreatic cancer is the third leading cause of cancer death, with an estimated 45,570 deaths and 56,770 new diagnoses in 2019. The five-year relative survival rate for pancreatic cancer is 9 percent, which is among the lowest for any cancer type. Multiple factors underlie these high mortality rates: the disease is very aggressive compared to other cancers, symptoms can be vague and screening is difficult. More than half of diagnoses occur after the cancer has metastasized, when the five-year relative survival rate drops to 2.9 percent.

It emphasizes a patient-centered approach that integrates patients' values and preferences into treatment decisions and also stresses the importance of multidisciplinary consultations, planning and follow-up.

Standard treatment for localized pancreatic cancer, or disease that has not spread outside of the pancreas, involves surgery to remove the tumor, combined with radiation and/or chemotherapy prior to surgery and/or following surgery to target potential residual disease. More than 80 percent of patients are diagnosed with tumors that have spread beyond the pancreas and cannot be removed surgically, however, and even patients who undergo surgery face local and distant recurrence rates of 50-90 percent.

Recent breakthroughs, including new systemic therapies and the emergence of stereotactic radiation, have driven significant changes in pancreatic cancer treatment, which led ASTRO to develop its first guideline on this topic. "Historically, very high rates of distant metastatic disease with pancreas cancer have overshadowed its tendency to recur locally. In the past several years, newer systemic therapies are proving to be more effective at controlling this cancer when it spreads, and fewer people are dying from distant disease. This makes treatments like radiation to manage local disease more meaningful," explained Manisha Palta, M.D., co-chair of the guideline task force and a radiation oncologist at Duke University.

The guideline first presents indications for radiation therapy in the adjuvant, neoadjuvant and definitive settings. It delineates between conventionally fractionated and stereotactic radiation therapy, providing the first clinical guidance on the newer, shorter-course approach. "One thing this guideline offers that hasn't been available previously is context about the current status of ablative radiotherapy such as stereotactic body radiation therapy (SBRT) and where it might be useful for patients with pancreatic cancer," said Palta.

Recommendations on the indications of radiation therapy for pancreas cancer are as follows:

The guideline also addresses ways to mitigate side effects related to pancreatic radiation, whether given alone or with chemotherapy. While the side effects from radiation therapy depend on how the radiation is administered, the most common toxicities include fatigue and digestive/gastrointestinal effects such as nausea, vomiting and diarrhea.

The guideline strongly recommends that patients who undergo radiation treatments for pancreatic cancer be given prophylactic anti-nausea medicines. It also conditionally recommends the use of antacid or acid-reducing medications.

Palta explained how these medications are used preventatively with radiation: "If we know that certain side effects tend to occur with a relatively modest or high frequency – such as nausea and stomach pain – there are medications we can give to patients prior to treatment to help mitigate those side effects."

The guideline comments on emerging and upcoming trial reports that will add to the evidence on stereotactic radiation and other aspects of pancreatic cancer treatment, and which subsequently will shape future clinical practice and guideline updates.

"Any patient who is diagnosed with pancreatic cancer deserves to have a multidisciplinary evaluation, where she or he can have nuanced conversations about the benefits and risks of different types of treatment based on the most current information available. It's also essential that any patient who might be an appropriate candidate for radiation have access to a radiation oncologist who can provide perspective on the pros and cons of treatment, so that the patient can make an informed decision," said Palta. “This is a rapidly evolving field and some potentially practice-changing studies that are not included in this guideline may become available in the relatively near-term future.”

The guideline was based on a systematic literature review of 179 articles published from May 2007 through January 2017. The 14-member task force included a multidisciplinary team of radiation oncologists from a variety of practice settings, a medical physicist, a medical oncologist, a surgical oncologist, a radiation oncology resident and a patient representative. The guideline was developed in collaboration with the American Society of Clinical Oncology (ASCO) and the Society of Surgical Oncology (SSO), who provided representatives and peer reviewers.