Program designed to break down barriers to breast cancer screening 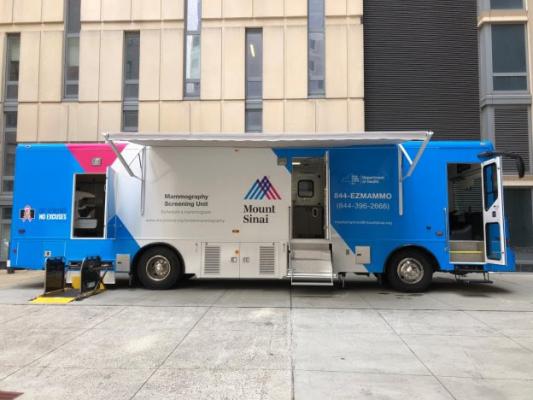 According to Laurie Margolies, M.D., system chief of breast imaging, Mount Sinai Health System and professor of radiology, Icahn School of Medicine at Mount Sinai: “Annual screening mammography beginning at age 40 has been shown to save lives. Our goal is to help women understand the benefits of mammographic screening and early detection. We want to break down as many barriers as possible, and encourage women to participate in screening mammography. By reaching women right in their communities, Mount Sinai’s Mobile Mammography Program helps reduce disparities in breast cancer detection and survival in those disproportionately burdened by this disease.”

The program is made possible with funds from Health Research Inc. (HRI) and the State of New York.

“By bringing screening mammography to New Yorkers via this mobile unit and using culturally-based education, we will help save lives,” said Margolies. “This is our overarching goal. Yearly screening mammography reduces, as much as possible, a woman’s risk of dying from breast cancer. Mount Sinai’s new ‘care on wheels’ will make it much easier for many New Yorkers to be screened. We are humbled and honored to play a role in improving women’s health, and to be welcomed by so many community organizations that are hosting Mount Sinai screening and education events.”