Mortality and late-stage cancer rates did not decline, yet 5-year survival rate more than doubled, highlighting how overdiagnosis inflates these survival measures 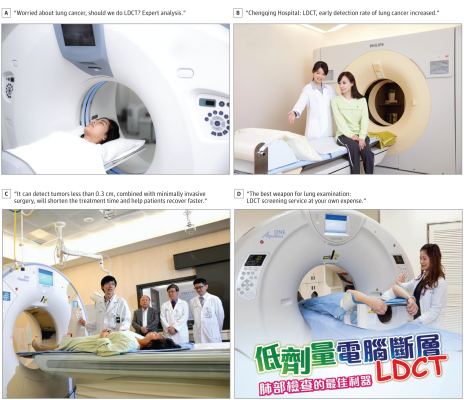 January 25, 2022 — A new study based on data from a national cancer registry in Taiwan found evidence that lung cancer screening may be leading to overdiagnosis at the population level. Low-dose computed tomography (LDCT) has been promoted in Taiwan to people, especially young women, who do not have a history of smoking. Investigators from Brigham and Women’s Hospital and collaborators at Taipei Medical University have found that over the last 15 years there has been a 6-fold increase in early-stage cancer diagnoses among women, but there has been no change in incidence of late-stage lung cancer or death from lung cancer, suggesting that screening is leading to overdiagnosis. Results are published in JAMA Internal Medicine.

“Promotions for lung cancer screening in Taiwan feature images of young women and dramatic language encouraging people to ‘avoid the tragedy of sudden death from terminal lung cancer,’” said senior author H. Gilbert Welch, MD, MPH, of the Brigham’s Center for Surgery and Public Health. “These campaigns conflate the risk of diagnosis and the risk of death. But what we find is that while increased screening has led to increased early-stage diagnosis among young women, it has not led to a decrease in late-stage cancer or death. This suggests that screening isn’t leading to better outcomes — it’s leading to overdiagnosis.”

The United States Preventive Service Task Force recommends lung cancer screening only for individuals who have smoked an average of one pack of cigarettes per day for 20 years and are between the ages of 50 and 80. But in other countries, including Taiwan, lung cancer screening for nonsmokers has become popular, even though it is not covered by Taiwan’s national health insurance program. Smoking prevalence among women in Taiwan is low — the rate has been less than 5 percent since 1980. Hospitals in Taiwan began to promote screening services in the mid-2000s, around the same time that the number of CT scanners increased dramatically. Health care professionals and some celebrities have publicly called for screening to be covered by the national insurance program.

Lung cancer mortality was stable, decreasing just slightly from 17 to 16 deaths per 100,000 people. The five-year survival rate jumped dramatically — a finding that is not surprising when overdiagnosis is at play, according to the researchers.

“The Taiwanese experience highlights the misleading feedback that follows cancer screening,” said Welch. “Survival rates always go up when there is overdiagnosis because people are getting diagnosed with a disease not destined to cause death.”

Welch and co-authors note that the primary limitation of their study was that they could not directly measure LDCT screening since it is paid for out of pocket and not billed to an insurance program. But data on the increasing number of LDCT scanners at hospitals, direct-to-consumer promotion, and the pattern of increasing early-stage diagnosis and stable late-stage diagnosis all indicate an increase in screening.

“Unfortunately, this is a recipe for overdiagnosis,” said Welch. “Our findings suggest that LDCT should be offered only to heavy smokers, not to lower-risk groups, and only after the benefits have been weighed against the harms, such as a false-positive diagnosis, incidental findings, diagnostic procedures and radiation-induced cancers.”