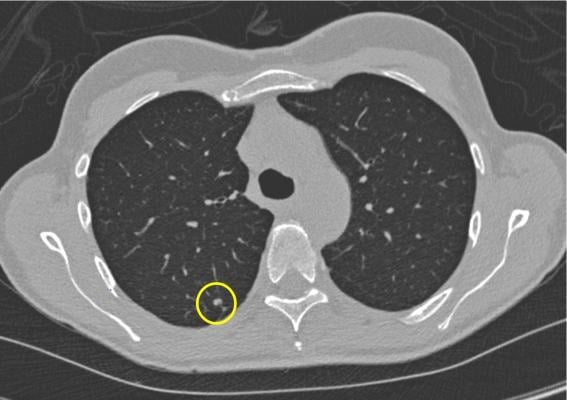 January 17, 2022 — A recent, substantial decline in lung cancer deaths is associated with earlier diagnosis of lung cancer than in the past, supporting the need for increased use of screening to save lives, according to a Mount Sinai study published in JAMA Network Open in December.

The earlier detection of lung cancer came about both due to increased screening via computed tomography (CT) and to follow-up on potential cancers found on scans meant to study other organs or disease. Once these precancerous and early-cancer nodules are found, they can be removed with surgery, which can often be curative, according to the study.

“This is the first time a large population-based study has demonstrated decreased lung cancer mortality with early detection—finding cancer in earlier stages—when tumors are smaller and more curable,” said the study’s lead author Raja M. Flores, MD, Chair of Thoracic Surgery at Mount Sinai Health System and Steven and Ann Ames Professor in Thoracic Surgery at the Icahn School of Medicine at Mount Sinai. “This study emphasizes the impact of screening followed by surgical intervention to save lives in people at high risk for lung cancer.”

Lung cancer is diagnosed in more than 200,000 people annually and remains one of the leading causes of cancer deaths in the United States. Smoking cessation programs after the landmark 1964 Surgeon General’s report on smoking and tobacco use have historically contributed to some decline of lung cancer incidence, but experts know that more needs to be done to quell the deadly disease. While prior studies have explored the association of smoking cessation, earlier interventions, and targeted therapies with non-small cell lung cancer mortality, the role of diagnosis at earlier stages due to early detection has not been adequately studied until now.

The findings were based on a retrospective analysis of 312,382 patients with non-small cell lung cancer, which accounts for the vast majority of lung cancer cases, from the Surveillance, Epidemiology, and End Results (SEER) Program, an authoritative source for cancer statistics. Using data from 2006 to 2016, researchers found that on average, lung cancer deaths decreased by about 4 percent each year.

During the same time period, early-stage diagnoses rose from 26.5 percent to 31.2 percent while late-stage diagnoses decreased from 70.8 to 66.1. Both are considered significant shifts, underlined by their resulting survival rates: the median length of survival for patients with early-stage lung cancer was 57 months while the median for late-stage cancer was seven months.

In 2013, during the study period, the U.S. Preventive Services Task Force (USPSTF) recommended that at-risk individuals be screened annually for lung cancer via CT. CT scans find cancer in 24.2 percent of scans while the previous modality of screening, chest X-rays, only found cancer 6.9 percent of the time.

“These findings in context with prior studies seem to suggest that awareness of CT lung cancer screening is associated with an earlier detection of non-small cell lung cancer, but unfortunately, patient adherence to the USPSTF guidance on lung cancer screening with low-dose CT remains low, at around 5 percent of those people who meet the criteria,” said study author Emanuela Taioli, MD, PhD, Director of the Institute for Translational Epidemiology and Associate Director for Population Science at The Tisch Cancer Institute at Mount Sinai. “That means that we cannot only attribute CT screening to decreased mortality, but our findings reinforce the importance of screening in the early detection, intervention, and effective treatment of cancer.”

Claudia Henschke, MD, PhD, Professor of Diagnostic, Molecular and Interventional Radiology at the Icahn School of Medicine at Mount Sinai, leads one of the largest lung cancer screening programs in the United States and oversees an international registry of more than 80,000 lung cancer screening patients. Dr. Henschke said this study underscores the need to ensure that people who are eligible for screening receive it and that research is conducted to investigate our ability to expand who may be eligible given the increase in nonsmoking lung cancer patients whose cancer is largely found in later stages.

“If all people who were eligible to be screened received the low-dose CT scan, which has a dose of radiation comparable to an annual mammogram, we could save up to 80 percent of those people,” Henschke said. “Our lung cancer screening program is open to all people at risk of lung cancer, anyone who is 40 and older whether they are never-smokers, current smokers or former smokers.”