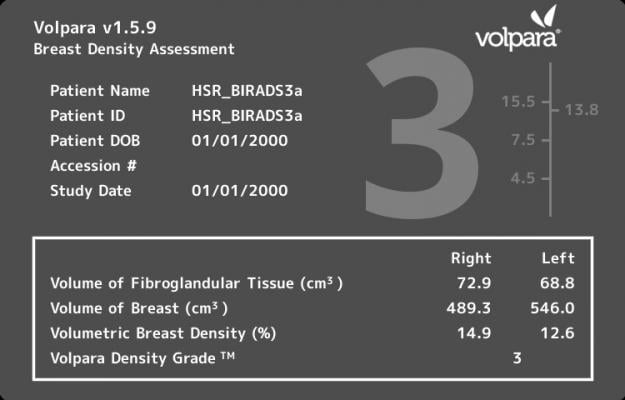 The study, "Volumetric breast density affects performance of digital screening mammography," was recently published in Breast Cancer Research and Treatment and was carried out in the EU-funded ASSURE project. The results suggest that, since fully automated measurements of breast density have much higher reproducibility than visual assessment, this automatic method could help with implementing density-based supplemental screening.

"There have been several studies that have demonstrated the impact of breast density on the sensitivity of mammography, including a recent study published in the American Journal of Roentgenology that showed a strong linear relationship between volumetric breast density and sensitivity. However, this is the first large-scale study to also demonstrate a strong relationship between volumetric density and other screening performance measures like recall rate, false positives or interval cancers," said van Gils.  "With the high reproducibility of the automatic VolparaDensity software, this could help with evaluating risk and better inform clinical decisions about adjunctive screening options based on women's specific density and other risk factors."

The study included 667 screen-detected and 234 interval cancers. Of all the tumors, 84.3 percent were invasive cancers. Mammographic sensitivity was 85.7 percent, 77.6 percent, 69.5 percent and 61 percent across VDG categories 1-4, respectively. Increasing breast density showed a strong linear relationship to all screening performance measures, except positive predictive value. The rates for recalls, false positives, and total and interval breast cancers in higher breast density categories were greater than those in lower density categories. Results demonstrated that a woman was nearly seven times more likely (4.4/1000 examinations versus 0.7/1000) to have an interval cancer if her breasts were extremely dense (VDG4) versus very fatty (VDG1) and approximately twice as likely (23.8/1000 examinations versus 11.2/1000) to have a false-positive if they were extremely dense (VDG4) versus very fatty (VDG1).

According to van Gils, another interesting finding is the relationship between cancer type (in situ or invasive), breast density and detection mode (screen-detected or interval). When only invasive breast cancer was taken into account, the difference in sensitivity between the density categories was even more pronounced.