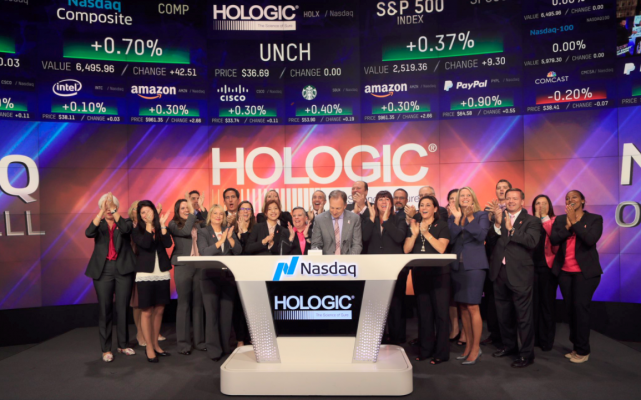 Earlier this year, the Genius 3-D Mammography exam was approved by the U.S. Food and Drug Administration (FDA) as superior to standard 2-D mammography for routine breast cancer screening for women with dense breasts.[1],[2],[3],[4] This updated labeling was based on clinical studies proving that the exam improves invasive breast cancer detection while reducing unnecessary recalls among women of all breast densities, including those with dense breasts. The expanded labeling also provides clarity for physicians who previously were unsure how to screen patients with dense breasts.

Other milestones in the last 12 months include two recent product launches, the Brevera breast biopsy system with CorLumina imaging technology and the SmartCurve breast stabilization system. The Brevera system is the world's first and only breast biopsy solution to combine tissue acquisition, real-time imaging, sample verification and advanced post-biopsy handling in one, integrated system, according to Hologic. The system allows physicians to perform fast and efficient procedures that save costs, improve the patient experience, and enhance workflow in the biopsy suite.[5]

Hologic's new SmartCurve system, when used with the Genius exam, is the first and only 3-D mammography system clinically proven to deliver a more comfortable and more accurate mammogram, compared to 2-D mammography alone, according to the company.[6] In a recent clinical study comparing the SmartCurve breast stabilization system to traditional flat paddle compression, the SmartCurve system improved comfort in 93 percent of women who reported moderate to severe discomfort with standard compression.[5]

The Genius 3-D Mammography exam (also known as the Genius exam) is only available on a Hologic 3-D mammography system. It consists of a 2-D and 3-D image set, where the 2-D image can be either an acquired 2-D image or a 2-D image generated from the 3-D image set.

[5] 3D biopsy only when used with the Affirm breast biopsy system.