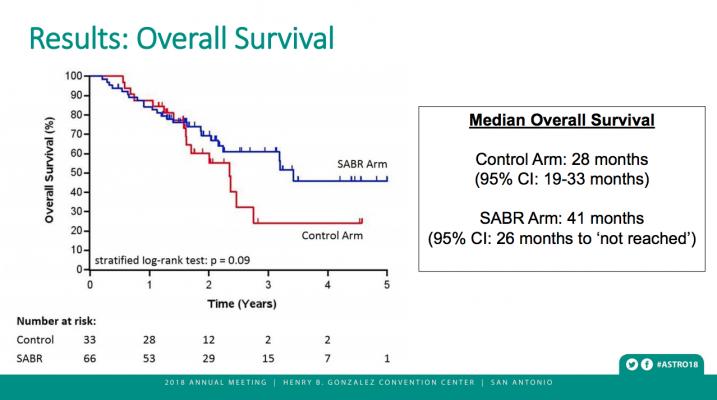 October 30, 2018 — In the first randomized, phase II clinical trial of its kind, researchers have shown that an aggressive form of high-precision radiation therapy can greatly increase how long oligometastatic patients live and doubles how long they live without cancer. The findings were presented in a news briefing and the plenary session at the 60th annual American Society for Radiation Oncology (ASTRO) 2018 meeting.

Generally, when a patient has a cancer that has spread to other parts of the body (metastatic cancer) they are considered incurable. This multi-center trial challenged this idea by studying patients with a variety of oligometastatic cancers — that is, cancers that had been previously treated but then returned in a limited number of other parts of the body. The patients were treated with stereotactic ablative radiotherapy (SABR), also known as stereotactic body radiation therapy (SBRT), which is a form of high-precision cancer therapy that delivers substantially higher doses of radiation to the tumor site in just one or a few treatment sessions.

“Traditionally, when a patient had a cancer that spread to other parts of their body — such as to their bones or brain — they were considered to be incurable,” said David Palma, M.D., Ph.D., lead author a researcher at Lawson Health Research Institute, the research institute of London Health Sciences Centre (LHSC) and lead institution of the multi-center study. “But there’s a theory — called the oligometastatic theory — that if a patient only has a few spots of cancer returning, those spots could be killed with radiation or surgery to improve their survival. Now, we’ve been able to show, for the first time in a randomized trial, that high-dose radiation can effectively treat these limited recurrences, and we’ve been able to increase survival by a median of 13 months.”

In this randomized, phase II, open-label study called SABR-COMET, Palma and his colleagues enrolled 99 patients from four countries (Canada, Scotland, the Netherlands and Australia). Each patient had been treated for cancer but the cancer had returned, with tumors appearing in as many as five different places. All patients had good performance status (ECOG 0-1) and a life expectancy of more than six months.

Patients had been diagnosed with a wide range of cancer types, most commonly breast (n=18), lung (n=18), colon or rectum (n=18) and prostate (n=16) cancers. In most patients (n=92), the cancer had spread to one to three new sites.

Between February 2012 and August 2016, the patients were randomized at a 1:2 ratio into two treatment arms: palliative standard of care treatments (SOC) and SOC plus stereotactic radiation therapy for all metastatic lesions. The median patient age was 68 years (range=43-89), and 59 percent of the patients were men. No baseline patient characteristics were significantly different between the two treatment arms. Median follow-up time was 27 months.

Patients who received SABR treatments lived considerably longer than those who did not. Median overall survival was 41 months (95 percent Confidence Interval: 26 months, upper limit not reached) for patients given stereotactic radiation, compared to 28 months (95% CI: 19, 33 months) in the standard treatment arm (stratified log rank p=0.09). This phase II trial was designed to look for a signal, defined as a p-value less than 0.20, as an initial comparison of these two treatment groups.

“We were surprised and quite pleased. We didn’t expect t survival benefit to be quite so long for patients with metastatic disease,” Palma said. He also is a clinician-scientist at the Ontario Institute for Cancer Research, which provided funding for this study.

Being treated with stereotactic radiation resulted in more negative side effects than standard treatments. Just 9 percent of patients who received standard treatments experienced serious adverse events (grade 2 or higher), while 30 percent of those in the SABR arm did (p=0.022). The most common negative side effects were fatigue (n=10), dyspnea, or difficulty breathing (n=9), muscle and joint pain (n=7), bone pain (n=6) or pain not otherwise specified (n=7). Three patients in the experimental arm died due to adverse events — one from a pulmonary abscess and one from subdural hemorrhage after surgery to repair a SABR-related perforated gastric ulcer and one from radiation pneumonitis. While such events can occur with standard radiation therapy, they are rare.

“Stereotactic radiation therapy needs to be delivered carefully and by an experienced team, and there is a small risk of very serious side effects, as well as mortality. But overall, for patients whose cancers have spread, and who are not expected to survive otherwise, the overall survival benefit of SABR appear to outweigh these risks,” Palma said.

There were no differences between the two treatment arms in quality of life measures, however. Scores on the Functional Assessment of Cancer Therapy: General (FACT-G) questionnaire at six months following treatment were similarly high for both patient groups (82.5 for SABR vs. 82.6 for standard therapy, p=0.992). Patients also reported similar quality of life outcomes on the physical, social, functional and emotional FACT-G subscales (all p>0.4).

In some cases, patients developed additional lesions during the trial. When this happened, noted Palma, the additional tumors could sometimes be successfully ablated. Because they were able to successfully treat a greater number of sites in these patients, the research team is now planning a follow-up study that will enroll patients with up to 10 metastatic lesions, called SABR-COMET-10.

“We don’t know the upward limit of how many tumors can be treated with SABR,” he said. “The concern is the amount of radiation exposure a patient can tolerate. We don’t know yet what the safe boundaries are. We’ve been very conservative, as this is a new technology.”

Nearly half (46 percent) of the patients treated with stereotactic radiation were still alive after five years, compared to 24 percent in the control group, said Dr. Palma — a result that he believes will encourage physicians to consider SABR as a treatment option.

“Ultimately, the question of whether an oncologist will offer this treatment as the standard of care for oligometastatic patients will be up to that oncologist,” he said. “At the very least, physicians should be considering this as a treatment option for their patients.”

“Stereotactic radiation therapy can increase how long these patients live and how long they live without their cancer coming back, and it doesn’t seem to have a detrimental impact on their quality of life.”