High-dose, High-precision Radiation Therapy Safe and Effective for Kidney Cancer Patients With Only One Kidney

New treatment option for patients facing this high-risk management scenario, according to a new study presented at ASTRO 2018 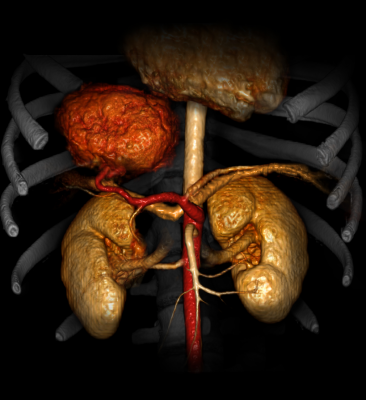 Treatment of renal cell carcinoma with stereotactic radiation therapy is as safe and effective for patients with one kidney as it is for those who have two, according to an analysis of the largest-ever, international dataset of solitary kidney patients to receive this emerging treatment. The findings will be presented today at the 60th Annual Meeting of the American Society for Radiation Oncology (ASTRO).

Renal cell carcinoma (RCC), which has been rising in incidence for decades, is the most common form of kidney cancer in adults in the United States, with approximately 65,000 new cases diagnosed annually. It is responsible for nearly 15,000 deaths each year. It is typically treated surgically, with tumor ablation reserved for patients who are not able or willing to have surgery.

A specialized form of radiation treatment known as stereotactic ablative radiotherapy (SABR), also known as stereotactic body radiation therapy (SBRT), is emerging as a potential alternative for kidney cancer patients. SABR has been shown to be effective in treating cancers in the lung, liver and spine using substantially higher doses of radiation delivered in a single, or just a few, treatment sessions. Earlier this year, a study published in the journal Cancer showed that SABR was safe and effective in treating patients with RCC who had both kidneys remaining. This new study shows it is just as safe and effective for patients who have only one kidney.

“Although RCC historically has been considered resistant to conventional radiation therapy, the high doses and high precision achievable with SABR overcome this resistance,” said lead author Rohann J. M. Correa, M.D., Ph.D., a radiation oncology resident at London Health Sciences Center in London, Canada. “Kidney SABR is thus emerging as a versatile, non-invasive outpatient treatment requiring one visit or a few visits. Our analysis demonstrates SABR to be highly effective with minimal side effects for RCC patients with a single kidney.”

Correa and his colleagues analyzed patient data from nine institutions across the United States, Germany, Australia, Canada and Japan within the International Radiosurgery Oncology Consortium for Kidney (IROCK) group. Of the 223 patients who underwent renal SABR, 81 had a solitary kidney. In the single-kidney cohort, patients were an average of 67.5 years old at time of treatment, mostly male (69 percent) and of good performance status (ECOG 0-1 in 97.5 percent). The median biologically-effective dose of radiation therapy was 87.5 Gray (Gy) and was identical in the solitary and bilateral cohorts (p=0.103).

With a median follow-up of 2.6 years, SABR provided 98 percent two-year local control and 98 percent two-year cancer-specific survival for RCC patients with a solitary kidney. These rates were not significantly different from those for patients with two kidneys treated with SABR: 97.8 percent local control (hazard ratio (HR) 0.89, p=0.923) and 94.3 percent cancer-specific survival (HR 0.16, p=0.082). Overall survival also did not differ between the cohorts, at 81 percent for the solitary group and 82 percent for the bilateral group (HR 0.75, p=0.445).

Renal function was modestly impacted by SABR. The decline in estimated glomerular filtration rate (eGFR) was similar for both cohorts, with average decreases of -5.8 (±10.8 mL/min) in the solitary cohort and -5.3 (±14.3 mL/min) in the bilateral cohort (p=0.984). None of the solitary kidney patients required dialysis, while six (4.2 percent) in the bilateral cohort did.

“We were somewhat surprised that SABR could achieve such a high local control rate without more significantly impacting renal function in the solitary kidney setting,” said Correa. “While this is partly attributable to the technology of SABR — allowing very high radiation doses to be delivered with incredible precision, thus maximally sparing renal function — it is also important to acknowledge important differences in baseline characteristics between groups.”

The research team used Cox hazards regression analysis to look at factors predicting which patients had worse outcomes after SABR. Larger tumor size (>4.0 cm) correlated with more profound decreases in eGFR after SABR (hazard ratio (HR) 4.2, p=0.029). “From this, we concluded that proper patient selection will be important in optimizing outcomes for solitary kidney patients treated with SABR,” said Correa.

“Treatment of RCC in the solitary kidney setting poses a unique management challenge, since a careful balance of minimizing nephron loss and maximizing cancer control is essential,” concluded Correa. “Recognizing the challenges of randomized controlled trials in this unique and somewhat-rare population, we hope that our large, international dataset will significantly advance the paradigm of kidney SABR, increasing awareness and access for patients facing this challenging management scenario.”

Resources on Radiation Therapy and Cancer

Abstract 222 – Renal SABR in patients with a solitary kidney: an individual-patient pooled analysis from the International Radiosurgery Oncology Consortium for Kidney (IROCK)

Purpose/Objective(s): SABR is an emerging ablative modality for primary renal cell carcinoma (RCC). Taking a multi-institutional and multi-national approach, we sought to evaluate oncologic and renal function outcomes in patients with RCC in solitary kidneys versus bilateral kidneys.