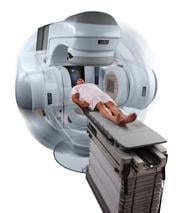 September 29, 2010 — A 51-year-old breast cancer patient from Switzerland has become the first person in the world to be treated using Gated RapidArc, which makes it possible to monitor patient breathing and compensate for tumor motion while quickly delivering radiotherapy during a continuous rotation around the patient.

This development from Varian Medical Systems enables the use of RapidArc radiotherapy technology in combination with respiratory gating – a process of turning the beam on and off in synchrony with the patient’s breathing. This technique increases the precision of treatment delivery by compensating for tumor motion.

Dr. Giorgia Nicolini, medical physicist at IOSI, said, “This is a very fast and straightforward procedure for the patient, who doesn’t speak the local language, Italian, but in any case has found it very easy to follow instructions for gating. She has been fully cooperative, and the part of the treatment time taken up by breathing management is decreasing after the first sessions. She also appreciates having to spend less time on the treatment couch.”

The hospital has used breath-hold gating as part of the treatment procedure for all left breast cancer patients since 2005 to better spare the heart and lung from exposure during radiotherapy treatment. Prior to Gated RapidArc, conventional seven-field gated intensity-modulated radiation therapy (IMRT) treatments would have taken 15 minutes to deliver. Using two-arc Gated RapidArc, the treatment is concluded in around four minutes.

Dr. Nicolini said clinicians at IOSI compared RapidArc and IMRT treatment plans for the patient and decided RapidArc offered the better opportunity to spare nearby organs from exposure and target the tumor.

“The use of two partial arcs enables us to shape a better dose distribution and do a better job of sparing the opposite breast,” said Antonella Richetti, M.D., head of the IOSI Radiation Oncology Department. In addition, RapidArc enabled the dose to be delivered using fewer than half the dose monitor units needed for an equivalent conventional seven-field IMRT treatment.

“We are now using Gated RapidArc to treat all left-sided breast cancer patients when there is a need to include the supraclavicolar and/or internal mammary chain lymph nodes, or when chest wall anatomy will affect the dose to organs we want to protect,” said Dr. Nicolini. “We are also planning to use the technique for lung and other thoracic and abdominal tumors when suitable.”

Gated RapidArc is a standard feature on the new TrueBeam system and is available as an option or upgrade on the Trilogy and Clinac iX accelerators from Varian. 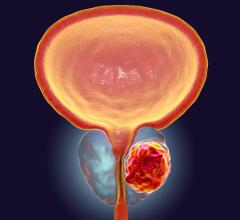