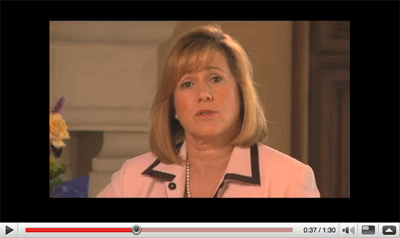 September 29, 2009 - The campaign to pass the EARLY Act and raise awareness about breast cancer in young adult women generated momentum at a recent congressional reception on Capitol Hill.

The EARLY Act would implement a national education campaign about the risks that young adult women (under 45) face from breast cancer. The bill, with $9 million per year in proposed funding for five years, would also provide assistance to young women who have the disease.

The legislation has generated widespread support both in Congress and from national organizations, including the Susan G. Komen Foundation and Breast Cancer Network of Strength (formerly Y-Me). The legislation has over 365 cosponsors in the House of Representatives and over 30 in the Senate.

Kathryn Tunstall, former chairman of the Board and currently chair of the clinical advisory panel of NeoMatrix, told the audience that her experience as a two-time breast cancer survivor had inspired her to take a leadership role at NeoMatrix. The company provides the HALO Breast Pap Test, a new, 5-minute, noninvasive test that helps determine an individual woman's risk of developing breast cancer.

Also speaking at the Congressional Reception, which was organized by the nonprofit Tigerlily Foundation and cosponsored by NeoMatrix, was Gail Lebovic, M.D., president of the American Society of Breast Disease.

The Capitol Hill event, which drew approximately 200 people, was held in the Rayburn building of the House of Representatives immediately before Pres. Obama’s speech to the Congress on healthcare reform. Among other speakers at the Tigerlily event were Rep. Debbie Wasserman Schultz (D.-Fla.), author of the legislation; Rep. Sue Myrick (R.-N.C.) and Rep. Jackie Speier (D.-Calif.).