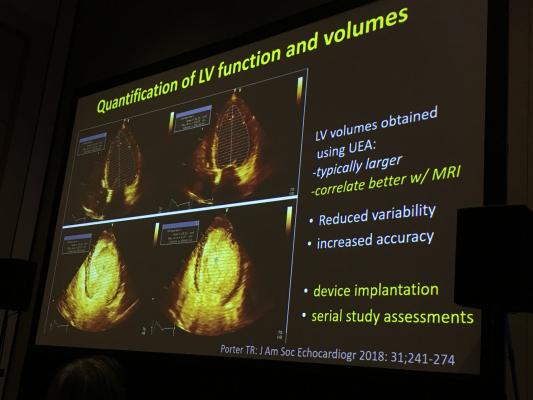 August 7, 2019 — Heart failure is the fourth most common cause for all admission to U.S. hospitals, and it is the most common reason for ordering an inpatient transthoracic echocardiogram (TTE). Research presented at the 30th Annual American Society of Echocardiography (ASE) Scientific Sessions shows patients who received an echocardiogram with contrast were less likely to require repeat tests and had shorter hospitalizations overall. This study shows the value of contrast (ultrasound enhancing agent/UEA) for improving clinical care and potentially decreasing healthcare costs.

Lead author Katherine C. Lee, Piedmont Heart Institute and Georgia Institute of Technology, Atlanta, said, “The appropriate use of echocardiography is one of today’s most challenging issues, having significant implications for both the quality and cost of care for patients with heart failure. An echocardiogram is the recommended first diagnostic test for heart failure and also the most common test performed for heart failure. With this retrospective analysis, we looked to analyze the relationship between contrast echocardiography and repeat echo testing among 9,115 patients who were admitted to the hospital with the diagnosis of heart failure over a four-year period. We found that patients who received a contrast echocardiogram as their first test were five times less likely to require a repeat echo and were discharged earlier from the hospital than those who did not receive contrast. This result highlights the importance of quality imaging (namely contrast echocardiography) in improving patient care, with the added benefit of generating potential cost savings to hospitals nationwide.”

Ultrasound contrast used to enhance echocardiographic images is not the same type of contrast used in invasive catheter-based procedures such as angiography. Ultrasound contrast is comprised of tiny microbubbles and is commercially available from three different vendors in the United States. It has no renal side effects, is rapidly metabolized and is safe for use, with the only side effect being rare allergic reactions (approximately 1/10,000, comparable to other imaging contrast agents).