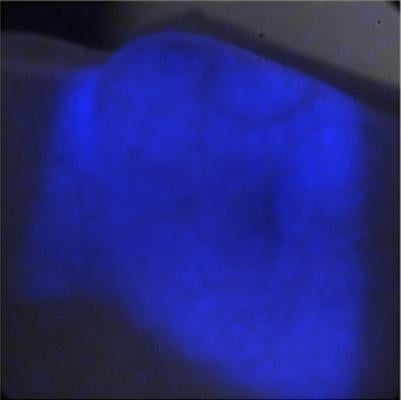 February 26, 2015 — Investigators from Dartmouth College’s Norris Cotton Cancer Center have discovered how the complex parts of the blue light known as the Cherenkov effect can be measured and used in dosimetry to make radiation therapies safer and more effective. Findings of the study, led by Brian W. Pogue, Ph.D., and Ph.D. candidates Adam K. Glaser and Rongxiao Zhang, were published in the journal Physics in Medicine and Biology.

"The beauty of using the light from the Cherenkov Effect for dosimetry is that it's the only current method that can reveal dosimetric information completely non-invasively in water or tissue," said Glaser.

Although the phenomenon has been constructively utilized for decades in high-energy particle and astrophysics, only recently has it been investigated during radiation therapy. In this study, investigators separately measured emissions of X-ray photons, protons and electrons, and they found widely varying utility.

Based on the findings of where dose correlates with Cherenkov emission, the Dartmouth team concluded that for X-ray photons, the light emission would be optimally suited for: narrow beam stereotactic radiation therapy and surgery validation studies; verification of dynamic intensity-modulated and volumetric modulated arc therapy treatment plans in water tanks; near mono-energetic sources (e.g., Co-60 and brachytherapy sources); and also for entrance and exit surface imaging dosimetry of both narrow and broad beams.

For electron use, Cherenkov emission was found to be suitable only for surface dosimetry applications. Finally, for proton dosimetry, there exists a fundamental lack of Cherenkov emission at the Bragg peak, making the technique of little use, although investigators say that post-irradiation detection of light emission from radioisotopes could prove to be useful.

"By detecting this light, we can pursue novel applications of Cherenkov light emission during radiation therapy to help clinicians improve the overall treatment outcome for patients," explained Pogue.

The collaborators intend to pursue further investigation at Norris Cotton Cancer Center to find other applications where this "free" light can be useful, such as continuing clinical trials in which the Cherenkov light from X-ray beams is imaged directly from a patient's tissue surface during radiation therapy.