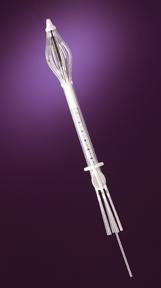 May 9, 2012 -Breast brachytherapy with a strut-based applicator appears to be an effective treatment for women who have ductal carcinoma in situ (DCIS) of the breast, according to a groundbreaking study presented at the annual meeting of the American Society of Breast Surgeons, held in Phoenix May 2-4.

The study is the largest ever presented on the use of breast brachytherapy to treat DCIS. Breast brachytherapy is a form of accelerated partial breast irradiation (APBI), a 5-day therapy that follows lumpectomy surgery. DCIS is early-stage breast cancer that is in the milk ducts and has not spread to healthy surrounding breast tissue.

The study authors noted that strut-based breast brachytherapy demonstrated favorably low rates of breast cancer recurrence and few toxicities (side effects that sometimes occur with any form of radiation treatment).

"Based on these results and other findings, there is emerging data that APBI provides excellent rates of cancer control and low toxicity in properly selected DCIS patients," said John Einck, M.D., lead author on the study and a radiation oncologist at the UC San Diego Moores Cancer Center.

Researchers reported data on 265 patients treated with a SAVI (Strut-Adjusted Volume Implant) device from 2007 to 2011 at 12 sites around the U.S., with a median follow-up time of 20.1 months and a median patient age of 62.

Of patients in the study group, 14% had narrow skin spacing (5 mm or less) between the brachytherapy applicator and the surface of the skin. This points to the device's ability to make 5-day treatment available to many women with cancers close to the skin, who would otherwise have 0to undergo six weeks of whole breast irradiation (WBI).

Examining "Grade 2" (symptomatic) post-treatment events, researchers reported no fat necrosis or hyperpigmentation. They documented low, 1.2% rates of seroma (a collection of fluid at the site of the lumpectomy and radiation treatment), breast pain and telangiectasia (visible dilated blood vessels near the surface of the skin).

"The biggest concern in treating DCIS with APBI is the risk of local recurrence, but this study has shown very low rates of recurrence that compare favorably with the data that is available for whole breast irradiation," said Kerri Perry, M.D., a Denton, Texas, breast surgeon and a co-author on the study.

Data for the study was drawn from the ongoing work of the SAVI Collaborative Research Group. The group was established to study clinical outcomes of APBI treatment with the SAVI device.

SAVI delivers a form of APBI, a shortened course of radiation therapy for early-stage breast cancer patients following lumpectomy surgery. The device's strut-based, open architecture design allows physicians to sculpt radiation based on patient-specific anatomy. That capability increases the number of women who can benefit from APBI. Clinical studies show that by providing targeted radiation where it is needed most, the risks of toxicity and cosmetic side effects are reduced.

This radiation treatment is part of breast conservation therapy, which includes lumpectomy- the surgical removal of the cancerous tissue within the breast plus tissue immediately around the tumor - followed by radiation. This approach is an alternative to mastectomy, which removes the entire breast and is often followed by breast reconstruction.

Radiation treatment after a lumpectomy has traditionally involved irradiation of the entire breast with an external beam. Besides the inconvenience of the six-week-long regimen, many women must travel some distance to receive external-beam radiation. That can put additional stress on their families, jobs, and financial resources.