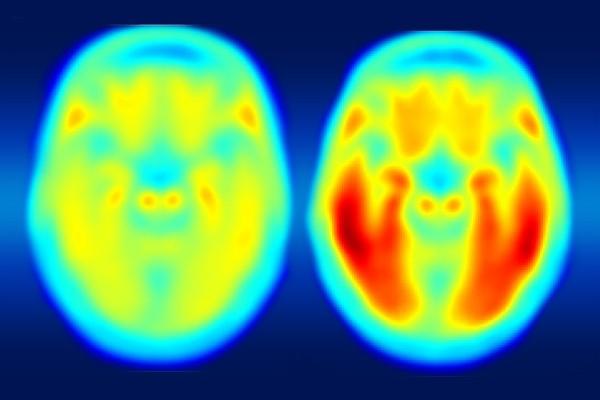 A study using a new PET imaging agent shows that measures of tau protein in the brain more closely track cognitive decline due to Alzheimer's disease compared with long-studied measures of amyloid beta. More red color indicates more tau protein. The image on the left shows the average tau accumulation in the brains of cognitively normal people, averaged over many individuals. The image on the right shows the average amount of tau buildup in the brains of multiple people with mild Alzheimer's symptoms. Scanning multiple individuals shows that the intensity of tau deposits correlates with the severity of cognitive dysfunction. Image courtesy of Matthew R. Brier.

May 12, 2016 — A buildup of plaque and dysfunctional proteins in the brain are hallmarks of Alzheimer’s disease. While much Alzheimer’s research has focused on accumulation of the protein amyloid beta, researchers have begun to pay closer attention to another protein, tau, long associated with this disease but not studied as thoroughly, in part, because scientists only recently have developed effective ways to image tau.

Using a new imaging agent that binds to tau protein and makes it visible in positron emission tomography (PET) scans, scientists at Washington University School of Medicine in St. Louis have shown that measures of tau are better markers of the cognitive decline characteristic of Alzheimer’s than measures of amyloid beta seen in PET scans.

The new study is published May 11 in the journal Science Translational Medicine.

Comparing brain images of people who are cognitively normal to patients with mild Alzheimer’s disease, the researchers found that measures of tau better predict symptoms of dementia than measures of amyloid beta. To determine degrees of cognitive impairment, some of the participants who underwent brain imaging also were assessed with the traditional clinical dementia rating (CDR) scale, cerebrospinal fluid measures, and widely used pen and paper tests of memory and other brain functions.

“Our work and that of others has shown that elevated levels of amyloid beta are the earliest markers of developing Alzheimer’s disease,” said senior author Beau M. Ances, M.D., Ph.D., an associate professor of neurology. “But in the earliest stages of Alzheimer’s disease, even with amyloid buildup, many patients are cognitively normal, meaning their memory and thought processes are still intact. What we suspect is that amyloid changes first and then tau, and it’s the combination of both that tips the patient from being asymptomatic to showing mild cognitive impairment.”

The study included 36 control participants who were cognitively normal and 10 patients with mild Alzheimer’s disease. While Ances called for larger follow-up studies, he said this analysis helped establish that the new tau agent, called T807, is an important tool for understanding the timeline of Alzheimer’s progression and for defining which regions of the brain are involved.

“Usually we can only diagnose patients later in the disease process, when brain function already is diminished,” he said. “We want to develop ways to make an earlier diagnosis and then design trials to test drugs against amyloid buildup and against tau buildup. While we currently cannot prevent or cure Alzheimer’s disease, delaying the onset of symptoms by 10-15 years would make a huge difference to our patients, to their families and caregivers, and to the global economy.”

Beyond establishing a timeline, Ances said the new tool is vital to gathering spatial information about affected brain areas. Elevated tau measured in cerebrospinal fluid has long been a marker of dementia, but Ances said this type of data could not pinpoint which parts of the brain are gathering abnormal proteins.

“The spinal fluid measures are very important, but they don't give us a complete spatial picture,” he said. “Our new study suggests you can tolerate a certain amount of tau clumped in the hippocampus, but once it starts spreading into other areas, especially the lateral temporal and parietal lobes, that seems to be the tipping point.”

With imaging agents for amyloid beta and now tau available, Ances said researchers have the tools necessary to assess the effectiveness of investigational therapies against the buildup of both proteins. The new agent is approved for use in the context of clinical research trials and likely will prove to be important in imaging the brain for other types of disorders that also involve excess tau buildup, including traumatic brain injury.