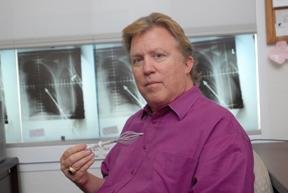 Study findings presented during the San Antonio Breast Cancer Symposium (SABCS) in December, stating that brachytherapy was associated with a twofold increased risk for mastectomy and complications, garnered almost immediate reaction from several industry groups, questioning that claim. The annual symposium is sponsored by the Cancer Therapy & Research Center at the University of Texas Health Science Center at San Antonio, the American Association for Cancer Research and Baylor College of Medicine.

Smith said he was “shocked” by the results. “I think that our results are very plausible and consistent with the literature,” he said. “However, I did not expect that we would find a difference in outcomes between brachytherapy and whole-breast iradiation using this claims-based approach. Such an approach has never been used before to evaluate breast brachytherapy.”

Smith and his colleagues said these data underscore the importance of waiting for “mature data” from randomized clinical trials before widespread adoption of breast brachytherapy.

Within days after the study was presented at SABCS, several industry groups issued statements countering the findings, especially questioning the validity of how the study was conducted.

The American Society for Radiation Oncology (ASTRO) said it was “concerned about the potential misinterpretation of data presented” and added, “While statistically significant, one should keep in mind that in either case, the rate of mastectomy is still very low.

“ASTRO cautions there are limitations to the interpretation of the data, given that it was drawn from records of patients [with] varying risk factors and stage treated between 2000 and 2007,” the statement continues. “Since that time, technology has dramatically improved, including the use of newer multichannel applicators with tighter dose constraints.

“APBI has several benefits, including a decreased overall treatment time and a decrease in the radiation delivered to healthy tissue and adjacent organs, but its long-term safety and effectiveness compared to WBI are not yet known, and results of randomized trials comparing APBI with WBI will not be available for many years. In the meantime, guidance for use of APBI outside of a clinical trial is needed.

“ASTRO released a consensus statement in 2009 outlining the appropriate criteria for selecting patients to be treated with APBI outside of a clinical trial…ASTRO believes that the study presented in San Antonio is a good example of why it is important to be selective in choosing which patients receive the accelerated treatment and advises physicians to defer to the consensus statement when deciding on a treatment course.”

The American Brachytherapy Society response criticized the study’s basis on a review of Medicare claims data, saying, “From prior analyses, we know that Medicare claims data are severely limited when it comes to extracting critically important details, such as the general medical condition of the patient, the extent of the tumor and many other important prognostic factors. Further, it is very difficult to adequately ascertain critical details regarding other treatments that patients may have received, such as the thoroughness of the initial breast tumor lumpectomy surgery, the full extent of systemic therapy received and whether a subsequent mastectomy was due to a reason other than local recurrence.

“In short, the analysis presented in San Antonio tells us very little in contrast to the results of many carefully performed studies of APBI accumulated over 20 years. As peer-reviewed published randomized clinical trials are the gold standard of scientific evidence to establish the safety and efficacy of medical interventions, it is important to emphasize that two such studies are available that have demonstrated equivalence of APBI in comparison to WBI for local control, complications and cosmetic outcome.

“There is an on-going prospectively randomized Phase III trial sponsored by the National Cancer Institute (NSABP B-39/RTOG 0413) that directly compares conventional whole breast radiation therapy to accelerated partial breast irradiation (including that performed with brachytherapy). The results of this trial will directly and definitively tell us whether there is a difference between the two approaches.

“It is the recommendation of the American Brachytherapy Society (ABS) that patients interested in APBI should, where possible, participate in the NSABP B-39/RTOG 0413 or other clinical trials. For those patients not interested or eligible for a clinical trial and wish to be considered for APBI, the ABS supports adhering to the established patient selection guidelines of our Society with consideration of similar published guidelines from the American Society of Breast Surgeons (ASBrS) and the American Society for Radiation Oncology (ASTRO).”

A statement issued by ASBrS’ executive committee concurred, suggesting “that the evidence in the MD Anderson study should be considered in pre-surgical counseling but is not strong enough to preclude the use of APBI in properly selected patients. As for all breast cancer treatments, we strongly support participation in clinical trials of APBI, including the prospective randomized NSABP/RTOG B-39, single-site protocols or prospective registries, and we endorse continuous, long-term, outcomes-based monitoring of the results.”

Robert Kuske, M.D., FAACE, Arizona Breast Cancer Specialists, is a co-principal investigator in the NSABP/RTOG B-39 study. He participated in a December press teleconference with other researchers to express their concerns as well.

“I have been treating women with APBI for 20 years and run trials before,” Kuske said. “APBI has several benefits, including a decreased overall treatment time and a decrease in the radiation delivered to healthy tissue and adjacent organs. To document its long-term safety and effectiveness compared to WBI, we await the results of the other seven randomized trials comparing APBI with WBI.

“I am concerned about the potential misinterpretation of data presented…These data have serious limitations and should not influence current treatment recommendations for women with early stage breast cancer fitting current eligibility criteria for APBI.”

Kuske also noted that the rate of mastectomy was very low, especially in comparison with the 35-40 percent recurrence rate after lumpectomy without any radiotherapy. “Note that the rate of documented recurrences of breast cancer after treatment is not reported,” he added.

“Doctors choose treatments for their patients based on cancer extent, grade, surgical margins and other factors, such as obesity, diabetes and age. This study failed to take these important tumor and patient issues into account and is therefore biased,” he said.

The technology used also was criticized by Kuske. “The APBI treatment given in this study is an antiquated balloon catheter with a single channel. Since that time, technology has dramatically improved...The side effects and toxicity seen with these modern technological advances are far better than the results presented in this study.”

Kuske added that he hopes doctors and patients will not be deterred because of these study results and will continue to consider APBI as an alternative to WBI. “Patients and physicians have been needlessly frightened because of the MDA study,” he said.

Brachytherapy Trial May be a Game-Changer

Eligibility criteria initially included women of all ages with invasive breast cancers or ductal carcinoma in situ (DCIS) up to 3 cm in pathological extent. Lymph nodes could be negative or 1 to 3 positive nodes without extracapsular extension.

The surgical margins had to be microscopically clear. Selection criteria were changed three years ago to exclude favorable breast cancers. Now, women under age 50 years are included whether they have invasive or noninvasive disease. Node-positive and Estrogen Recepor-negative patients are allowed.

Early in the trial, B-39 was accruing up to 275 patients per month across North America, making it one of the most successful breast cancer clinical trials of all time. The selection criteria were tightened after the first 3,000 patients to high-risk women, so the rate of accrual has naturally slowed. But the trial should be complete with 4,300 patients near the end of 2012 or early 2013. To date, approximately 4,020 women have been enrolled onto study. It is considered as a landmark trial that may be practice-changing.