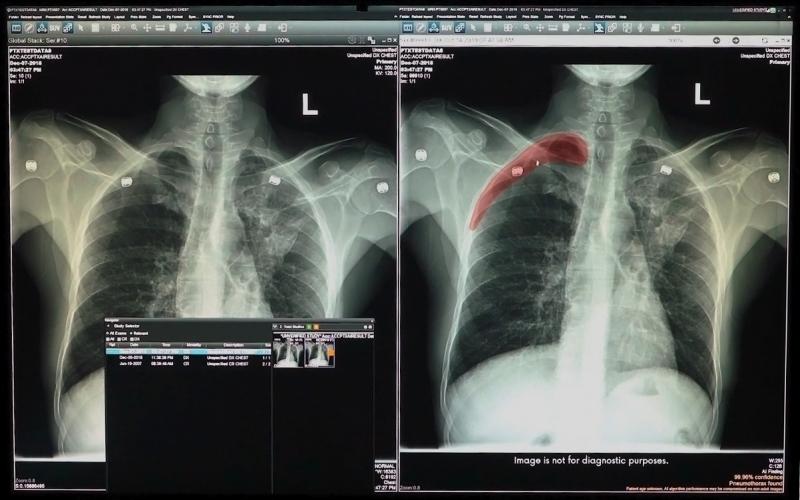 On a monitor in the downtown Chicago engineering laboratories of GE Healthcare, a faux worklist appears on screen.  From a list of patient exams that need interpretation, Uma Subramanian, Senior Technical Product Manager of the company’s PACS product team, clicks on a chest study. Patient information appears on the monitor along with a box showing a “confidence score” of 99.96% for the presence of pneumothorax (characterized by a collapsed lung).

A smart algorithm had flagged the case as being suspicious for this condition. The score indicates the algorithm’s confidence that its radiographic signs are present.

The algorithm, which was built by GE Healthcare (GEHC) in alliance with the University of California, San Francisco, works seamlessly with the company’s Edison Open AI Orchestrator. GEHC executive Karley Yoder likened the Orchestrator, which the company showcased at RSNA 2019, to a concert conductor. Rather than directing different parts of an orchestra, Open AI Orchestrator directs imaging cases to algorithms fueled by artificial intelligence. “It picks the right solution at the right time for the image coming into the workflow,” said Yoder, GEHC Vice President and General Manager of AI.

Like the pneumothorax algorithm, the Open AI Orchestrator — both of which were built by GEHC, currently for its Centricity PACS — operates automatically behind the scenes.

“The physicians (interpreting the image) don’t even realize they are using a product,” Yoder said.  “They just see that their tasks are completed more efficiently.”

Edison Open AI Orchestrator does not force radiologists to view the AI-analyzed images that highlight signs of pneumothorax. Instead Orchestrator uses AI results to prepare worklists on Centricity PACS, sorting and ordering cases listed on them.  Radiologists can select whether to display flags on these cases to indicate visually which ones may need quick attention.

Users of the Orchestrator can also leverage smart algorithms to prioritize the worklist. This option is provided to maintain the primacy of the radiologist, while addressing the opportunity for AI to boost efficiency and, potentially, clinical effectiveness.

Once chosen from the worklist, individual cases can be called up by the radiologist. An example would be one designated as suspicious by the pneumothorax algorithm.

In her demonstration, Subramanian noted that AI-enhanced images highlighting pneumothorax do not automatically appear in this version of the software, which is currently sold only in countries that accept the CE Mark. Instead, she brought up clinical data — and a box showing a “confidence level” of the AI finding — by hovering the cursor over a case flagged as likely showing signs of pneumothorax.

“When you click ‘View Images,’ you just see the chest frontal image — not the AI finding,” said Subramanian, who demonstrated the technology for Imaging Technology News (ITN) at GE Laboratories in downtown Chicago in mid-November 2019.

GEHC purposely does this to give radiologists what they want, she said.  “We heard that radiologists want to be able to (view or visually see) the original image and find out for themselves where the pneumothorax is.”

The function, however, is customizable. The system can be programmed to display the AI findings immediately, she said. If, alternatively, radiologists want to review the primary images first, the AI-enhanced image is just a mouse click away.

In the demonstration last November, clicking an icon at the upper left of the screen (the icon for “AI findings”) opened a separate window containing thumbnails of the AI assessment for pneumothorax. Clicking a thumbnail brought up the AI-enhanced radiograph showing a region of interest highlighted in red. Included in that region were signs of the suspected pneumothorax. (Subramanian noted that the software with its ability to generate highlighted regions of interest is pending FDA clearance for diagnostic purposes.)

In the near future, cases might be assessed for more conditions than just pneumothorax. At RSNA 2019, GE Healthcare demonstrated algorithms for the detection of hemorrhagic stroke and breast cancer, as well as others from aidence, aidoc, Kheiron Medical, koios and Lunit.

By the end of 2020, dozens of smart algorithms may be embedded in the AI Open Orchestrator, according to Subramanian. Plans call for some — but not all — to come from GEHC; others from third parties.

Accipio ICH exemplifies a third-party algorithm. GEHC worked with the developer of the algorithm, MaxQ, to embed it in the Orchestrator.

Rather than looking for signs of a pneumothorax in chest radiographs, Accipio ICH has been designed to assess brain CTs for intracranial hemorrhage.

“The concept is the same (regardless of the condition being assessed),” Subramanian said. “The (algorithm and Orchestrator) works behind the scenes to find problems with the patient, then flag the worklist so the busy radiologist knows which of the studies have to be read quickly, so patient care can happen faster.”

At GE labs in downtown Chicago, Subramanian demonstrated how Orchestrator works with the ICH algorithm. As in the pneumothorax case, she first looked over the worklist, then hovered over a chosen case.  Clicking the “View Images” box caused images to appear on the monitor — brain CT images not enhanced by AI.

When the “AI findings” icon was clicked, thumbnails of the AI assessment appeared in a separate window. Clicking one of these thumbnails opened two windows. One had the following message: “Analysis complete: Suspected acute ICH found;” the other contained brain CT slices.

Subramanian scrolled through these slices.  Ones with signs of ICH were surrounded by a red border. Those without such evidence were not bordered.

“With this red border around the slices, it is easy for the radiologist to quickly say, ‘Yes I see the ICH,’ ” she said.

A key point of Accipio ICH — as well as the algorithm that detects pneumothorax and ones still to be added —- is that the algorithms, like Open AI Orchestrator, are always running in the background. This invisible assistant could help radiologists stay on top of their case loads.

Without smart algorithms — and Orchestrator to make them practical — radiologists would have to go through each exam or potentially thousands of CT slices to find evidence of disease or disorder.  With these algorithms, running as part of Open AI Orchestrator, however, efficiency might be improved. Reducing the time from imaging study to definitive diagnosis might allow clinicians to start therapy earlier. And these efficiencies may only mark the beginning.

“In the future we will be able to automatically populate clinical findings into reports. This will further automate tasks and reduce the work (that has to be done by) radiologists,” Subramanian said.  “And (in the coming year) we will be able to on-board other algorithms behind our orchestration layer – to create an AI ecosystem to flag cases that need quick interpretation.”