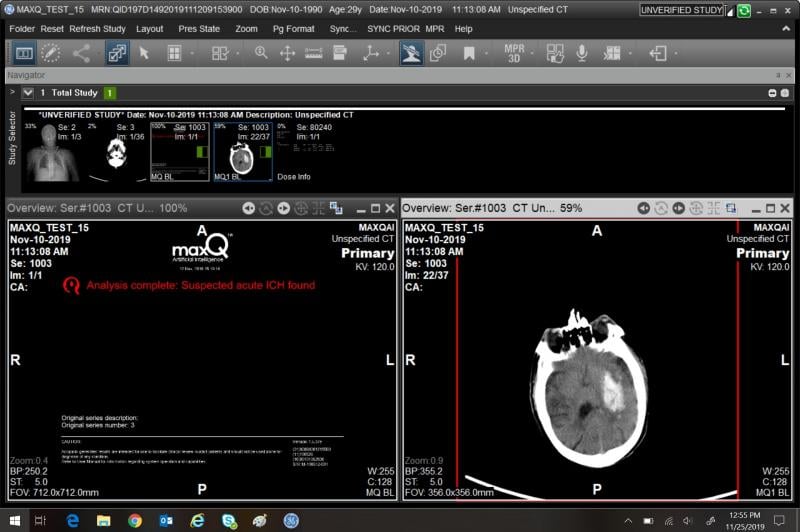 During a demonstration performed at a GE Healthcare laboratory in Chicago, a smart algorithm framed a brain scan image showing a suspected acute intracranial hemorrhage (ICH). The algorithm was developed by third-party company MaxQ AI. Screenshot courtesy of GE Healthcare

Radiologists are being asked to make simple what is increasingly complex — and to do so quickly, efficiently and at less cost. All the while, the data required to do so is becoming more unwieldy. This may be causing some radiologists to burnout.

Burnout is a concern for radiology professionals, according to the American College of Radiology. Although its underlying cause is debatable, there is general agreement that algorithms fueled with artificial intelligence (AI) might help radiologists overcome it. AI assistants have been suggested as the means to this end. As such they may sound great, but the proliferation of such automatic, artificially intelligent assistants could — ironically —have the opposite effect.

Rather than reducing workload, they threaten to add to it, requiring radiologists to learn how to operate each piece of software — with added clicks and added time, when the solution to burnout actually requires fewer clicks and less time.

Someone familiar with radiology workflow and the impact of automation on radiologists is Karley Yoder, GE Healthcare Vice President and General Manager of AI. “We have to take time out of time-consuming and inefficient processes,” said Yoder, noting that this has to be done in a way that does not increase the workload put on the radiologist.

The Edison Open AI Orchestrator may provide the means for achieving this objective. The Orchestrator runs AI functionality automatically in the background when it is needed. Much like a human conductor calls on the percussion, strings and wind sections of an orchestra at different times during a symphony, GEHC’s orchestrator would direct AI algorithms on what to do, when and how.

And like a symphony conductor, GEHC’s Orchestrator would always be present. Unlike the leader of a symphony, however, it would be transparent — invisible to the audience, in this case, the radiologist. In this way, it would relieve the burden of doing the needed “clicks,” while letting radiologists concentrate on making decisions.

“We want to prioritize tasks in a way that reflects clinical priority and how clinicians want to interact with their work,” Yoder said. This sort of intelligence is needed, she added, to coordinate which algorithm is relevant in the context of a given patient — and to standardize how AI insights are delivered.

Software like this might activate algorithms to group tasks in a worklist according to subspecialty such as neuroradiology or body CT. Then it might prioritize tasks in the resulting worklists. One smart algorithm might identify and flag likely cases of pneumothorax; another might scrutinize CT brain scans for signs of intracranial hemorrhage.

This algorithm is compatible with GEHC’s Centricity PACS and its Edison Open AI Orchestrator. In the near future, it may be joined by more than a dozen such algorithms.

“Our goal for next year is to (ensure compatibility) with about 20 AI algorithms (through API (application programming interface),  integration into) our ecosystem,” said Uma Subramanian, Senior Technical Product Manager at GE Healthcare. These will be a combination “of in-house GE algorithms (as well as) third-party algorithms.”

GEHC has developed an open specification, similar to an API, that third-party companies can utilize to make their algorithms compatible with the Orchestrator. “We could then provide these algorithms for use by our customers,” she said. Or that the ones purchased from these third parties directly are compatible with its PACS solution, according to the company.

Although Edison Open AI Orchestrator currently is designed only for use within the Centricity PACS, it may eventually be compatible with other PACS and vendor-neutral archives. GEHC engineers ultimately want to make the Orchestrator widely available.

“You would open up your PACS like normal. However all of a sudden the worklist would be prioritized and the information you need would be right at your fingertips,” Yoder said. “So Open AI Orchestrator does not operate like a separate tool. Instead it’s always there, always working behind the scenes.”

Orchestrator might even be embedded in specific imaging technology, like portable X-ray machines, or in electronic boxes cabled to imaging equipment. Such boxes might afford the advantage of central administration by the Open AI Orchestrator while allowing wide disbursement of the software and the AI algorithms.

But these are future possibilities. In the immediate future, Orchestrator will be bound exclusively to Centricity PACS. As such, it will call up software functions, some ordered by algorithms built on GE Healthcare’s Edison platform; others by algorithms built by third-party manufacturers.

“The reason we are not just focusing on GE Healthcare-developed algorithms is that we have heard from customers, radiologists and heads of departments, that they want to choose the algorithm that works on their images,” Subramanian said. “So the benefit or advantage of having an ecosystem is that we allow third parties to collaborate with us, so the end user — the customer — has the benefit of all the algorithms and not just those from GE Healthcare.”

Editor’s Note: This is the second blog in a four-part series about how artificial intelligence might be used to combat radiologist burnout. The first blog, How Burnout Puts Radiology at Risk, can be found here.