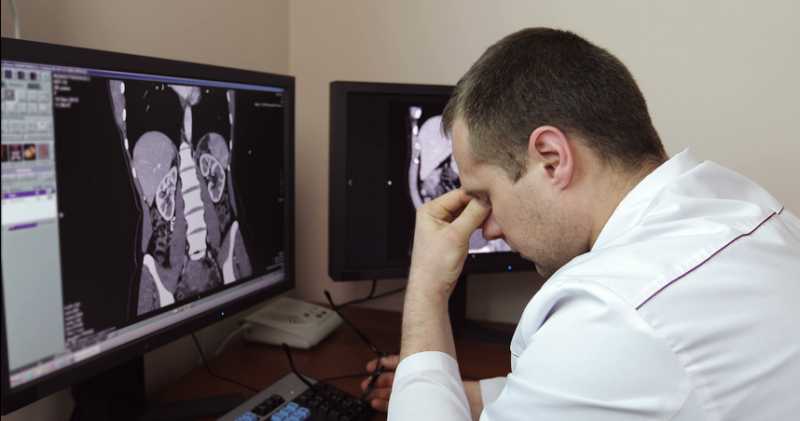 Pressed to do more, some radiologists are burning out. And the problem may be getting worse.

Since then, burnout has continued to concern radiologists. And for good reason. A paper published April 2016 in the Journal of the ACR warned that burnout is not only prevalent but could result in errors affecting patients, premature retirement, even thoughts of suicide.

Keith Hentel, M.D., executive vice chairman of the department of radiology at Weill Cornell Medicine and NewYork-Presbyterian in New York City, emphasized in an interview with Imaging Technology News (ITN) that burnout is not specific to radiology. “It is a big problem that affects many physicians in every specialty,” Hentel said.

But radiologists may be particularly susceptible. In January 2018, the American College of Radiology stated that “radiology professionals are at greater risk for burnout than most other physicians.” In 2015, the ACR stated that the “burnout rate is greater (for) diagnostic radiologists than the mean for all physicians.”

In its 2018 statement, the ACR identified a number of practices specific to radiology that make physicians in this specialty particularly vulnerable. These include:

Work overload is commonly cited as an underlying cause of burnout. But workload may not be the root cause in radiology, Hentel said. “Burnout is not inherent to reading more cases or even working more hours to read those cases,” he said. “In radiology it may be more that you can’t take the amount of time you need to provide the kind of care you want to provide.”

While the underlying cause of the problem is debatable, there is consensus that artificial intelligence may provide at least a partial solution. AI could perform some repetitive tasks otherwise done by radiologists, Hentel said, “letting us focus on what we do best.”

As a way to address burnout, the ACR has proposed practices that would “help its members find joy and meaning in their work.” These include:

These might be achieved by hiring more people or through software that integrates AI into the workflow, software that senses the need for certain smart algorithms and triggers their function.

Invisible to radiologists, this technology would work in the background, automatically running applications that would make radiologists’ jobs easier and faster to do. It would govern the many smart algorithms that might simplify tasks radiologists would otherwise perform and streamline workflow, for example, by organizing worklists according to such radiology subspecialties as neuroradiology or body CT and then triaging them.

An example of that software is scheduled to debut at RSNA 2019 in the GE Healthcare booth (McCormick Place South Hall 4133). Called the “Edison Open AI Orchestrator,” it has been designed to operate smart algorithms that might save radiologists time. The software is being positioned as an intermediary between the radiologist and smart algorithms, according to Karley Yoder, GE Healthcare Vice President and General Manager of AI, who estimated that a dozen or more different solutions, all with their own operating instructions, are being groomed by her team as intelligent assistants to help reduce the burden being put on radiology professionals.

Orchestrator allows “AI solutions to deliver their findings in a uniform way to the radiologist,” she said, “so radiologists can just focus on the insights and the information delivered by the AI.”

The Open AI Orchestrator would work with smart algorithms regardless of whether they were built by GE Healthcare or a third-party partner of the company. And, by working invisibly in the background, the company’s solution would eliminate the need for radiologists to learn how to operate the different packages of AI software.

“To be useful, the technology should help radiologists do their jobs faster and better than how they are doing them today,” Yoder said. “They shouldn’t even feel that it exists.”

Editor’s Note: This is the first in a four-part series about radiologist burnout and how artificial intelligence might be used to combat it.