Meaningful Use Moves to the Next Stage

As the campaign to increase EMR adoption moves into its final phase, a shift in focus to meaningful outcomes signals big changes ahead 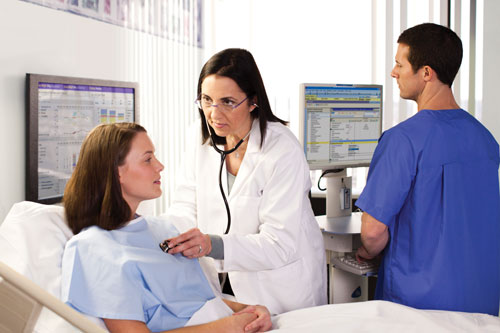 Born out of the Health Information Technology for Economic and Clinical Health (HITECH) Act of 2009, the Meaningful Use (MU) program was intended to increase adoption of electronic medical records (EMR) and other information technology to improve delivery of care while lowering costs. As healthcare providers have attempted to work through the various stages to earn reimbursement incentives — or avoid penalties — many have been left frustrated and confused by objectives that do not seem to apply to their practice. Nowhere has this been more true than in radiology.

The Centers for Medicare and Medicaid Services (CMS), architect of Meaningful Use, has helped providers navigate the program’s first two stages, and released final rules for the terminal Stage 3 last October. Then in January, the whole program got turned on its head when Acting CMS Administrator Andy Slavitt announced that Meaningful Use was coming to an end, to be replaced by a new program focusing on the outcomes achieved through use of EMRs and other technology.

As of press time, guidelines for the new program have yet to be released, and Slavitt indicated that until such time, Stage 3 MU requirements will still be in effect.

While the Meaningful Use program has generated much interest since its official launch in 2010, providers have been largely split between viewing it as a boon or a burden. Keith Hentel, M.D., associate professor of clinical radiology, Weill Cornell Medical College, and associate attending radiologist, New York–Presbyterian Hospital, was initially interested in bringing his department into the program, but ended up choosing not to pursue certification. He detailed the challenges that ultimately led to this decision during a panel session at the 2015 Radiological Society of North America (RSNA) annual meeting:

Ambiguity of the guidelines: “In the Federal Register there were 196 pages about Meaningful Use. CMS had different summaries — 81 pages, 91 pages — and it wasn’t very clear how this applied to radiologists.”

Radiology-specific systems divorced from the hospital networks: “We had what I call the Great Divide, [which] is the fact that we have our EHRs in our institutions and we have our radiology information systems, and it’s radiology IT’s job to transverse that.”

Lack of certified technology: “We were either going to have to replace it and depend on the fact that it was going to get certified, or add additional information technology to our enterprise.”

Lack of meaning to Meaningful Use: “When you really look at some of these objectives, they’re not really pertinent to the practices we provide. We had other projects which did have meaning to our radiologists and to our practice.”

While Hentel ultimately decided not to pursue Meaningful Use for these reasons, it was by no means an easy decision. “I don’t want to be singled out or labeled as the person who’s not participating; I don’t want to be different than the rest of the practitioners, especially as our institution transitions into accountable care. I want that seat at that table,” he said.

Those who opted to pursue MU certification acknowledged facing many of the same decisions. One aspect that proved challenging for radiologists in particular was how to determine which patients, if any, could be counted toward attestation. For most of the objectives, the denominator was identified as “unique patients seen by the eligible provider.”

“We actually wrote to CMS and said as radiologists there’s two kinds of encounters we have,” said James Whitfill, M.D., chief medical officer for Lumetis LLC, of his experience with Meaningful Use while at Southwest Diagnostic Imaging (SDI). “There are times where our mammographers are doing a biopsy on a patient and they are actually seeing the patient, you have face-to-face contact. There are other times where I’m looking at a digital image on a screen. Do both of those count as seeing the provider? Only one? CMS said ‘You decide.’ ” Ultimately, SDI counted only face-to-face contact with the patient toward MU measurement.

By the time SDI began contemplating Meaningful Use certification in 2012, its radiology information system (RIS) vendor had opted not to pursue full EMR certification, opting for modular certification instead. Whitfill said SDI did not want to replace its RIS at that time, so they began pursuing an ambulatory EMR solution. “Our decision was let’s go ahead and go forward with Meaningful Use, primarily because we didn’t know what was going to happen with the exemption and we didn’t want to be in the place where we had to now buy this more expensive technology a couple years down the pike and there would be no stimulus money left behind,” he said

Brigham and Women’s Hospital in Boston also had to start by deciding what constituted a patient seeing a provider, according to Ramin Khorasani, M.D., vice chair, Department of Radiology and assistant professor at Harvard Medical School. “For us to take our ‘seen by’ to only be on patients we saw meant that when I read an abdominal CT it was a minimal consultative service similar to a cardiologist reading an EKG for another physician,” Khorasani said during the RSNA panel. “That just didn’t sit very well with our leadership team because on the same side we were trying to argue with Medicare that we add value to the process of care.”

Taking feedback from providers under consideration, CMS released the initial version of the Stage 3 requirements in May 2015, followed by a 60-day comment period. The final rules were made public in October, covering both the 2015 Edition Health IT Certification Criteria and the Medicare and Medicaid EHR Incentive Programs.

Most significantly, the start of reimbursement penalties for non-compliance was pushed back to Jan. 1, 2018, essentially making Stage 3 optional in 2017. Providers who do choose to do their attestation next year will be allowed a 90-day reporting period; that privilege will be extended to new providers in 2016 and 2017.

Interoperability was one of the key themes touched on in public comments, as many providers struggled with the Great Divide described by Hentel. CMS took these comments into consideration, and more than 60 percent of the Stage 3 objectives now require interoperability. This is also one of the central themes of the 2015 Edition Health IT Certification Criteria, along with increased transparency and competition.

MACRA and The Way Forward

With the announcement of the end of Meaningful Use, however, the lasting impact of the Stage 3 objectives remains to be seen.

“The EHR Incentive Programs were designed in the initial years to encourage the adoption of new technology and measure the benefits for patients. And while it helped us make progress, it has also created real concerns about placing too much of a burden on physicians and pulling their time away from caring for patients,” said Slavitt and Karen DeSalvo, M.D., MPH, M.Sc., national coordinator for health information technology, in a statement Jan. 19 on the CMS blog.

While guidelines for the new program have yet to be released, Slavitt and DeSalvo said they will debut sometime in 2016. The Medicare Access and CHIP Reauthorization Act of 2015 (MACRA) will form the foundation for this meaningful outcomes program, which will be something of a spiritual successor for Meaningful Use. Four guiding principles will underlie the new performance measures:

1. Rewarding providers for the outcomes technology helps them achieve with
their patients.

2. Allowing providers the flexibility to customize health IT to their individual practice needs.

The MACRA regulations will only cover Medicare physician and clinician payment adjustments, as the EMR incentive programs for Medicaid and Medicare hospitals have a different set of statutory requirements. Physicians will continue to be measured on their meaningful use of certified EMR technology to determine payments.

“The process will be ongoing, not an instant fix, and we must all commit to learning and improving and collaborating on the best solutions,” wrote Slavitt and DeSalvo. “Ultimately, we believe this will be a process that will be most successful when physicians and innovators can work together directly to create the best tools.