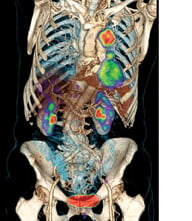 Defining disease processes by their cellular and molecular signatures has enabled molecular diagnosis and the development of targeted therapies, and advances in genomics offer promise for earlier disease detection and possibly molecular prevention. The field of molecular imaging is embracing these advances and is using a diverse set of molecular imaging strategies to interrogate disease states and physiology.

Positron emission tomography (PET) is currently the most recognizable clinical application of molecular imaging, utilizing injectable molecules labeled with positron-emitting isotopes to image molecular interactions and biological processes in vivo. PET is most often performed using hybrid PET/computed tomography (CT) scanners that allow for precise anatomic localization of molecular data and simultaneous anatomic evaluation in a single exam. Hybrid PET/magnetic resonance imaging (MRI) scanners have only recently entered the market. While PET/MRI is unlikely to replace PET/CT for all clinical application, the fusion of PET and MRI will likely expand the horizon of molecular imaging and does have a promising future for selected clinical applications such as neurologic imaging, where MRI is the current gold standard modality; and pediatric oncologic imaging, where radiation dose reduction is important.

Fluorine (18F)-fluorodeoxyglucose (FDG) remains the “workhorse” probe for PET imaging and accounts for the vast majority of clinical PET studies currently being performed. FDG has proven clinical value for staging, restaging/surveillance and assessment of treatment response in many cancer types, and has revolutionized the practice of oncology. FDG also has clinical utility for selected applications in neuroimaging and cardiovascular imaging.

The bone imaging agent 18F-labeled sodium fluoride (NaF) has existed for decades but is enjoying a renaissance in the modern era of PET/CT. NaF has equal or higher sensitivity for detection of benign and malignant osseous lesions when compared with single-photon bone tracers, such as 99mTc medronate. However, a distinct advantage of NaF PET/CT bone imaging is that the CT data allow for improved specificity, thus reducing the diagnostic uncertainty and nonspecificity that has long plagued planar single-photon bone scans.

Development of specific molecular probes for Alzheimer’s-type dementia represents a long-awaited solution for a prevalent and challenging clinical problem. Imaging plays an important role in dementia evaluation, but anatomic brain imaging (CT or MRI) is relatively insensitive and nonspecific for determination of the precise dementing process. Recently developed PET probes that target beta amyloid neuritic plaques — the density of which is correlated with likelihood of Alzheimer’s-type dementia — allow for imaging of Alzheimer’s-type dementia with greater sensitivity and specificity. 18F-florbetapir (Eli Lilly) is the first of this class of PET imaging agents to be FDA-approved and is available for clinical use.

Current molecular imaging research is focused on creation of other selective PET probes targeted to specific biological processes. Some of these novel PET probes currently in development, or recently released, include 18F-fluorocholine for imaging of prostate carcinoma and some brain tumors, 18F-fluorodopa for imaging of parkinsonism and some brain tumors, 68Ga-DOTATOC/DOTATATE for imaging of neuroendocrine tumors, and 18F-fluoromisonidazole for imaging tumor hypoxia and 18F-fluorothymidine for imaging cellular proliferation, both of which may be helpful for prediction or assessment of response to antitumoral treatment modalities. The availability of such specific probes may alter the future treatment of selected diseases, but also may allow PET to play an increasing role as a surrogate endpoint or biomarker in clinical trials and pharmaceutical development.

MRI is, and will always be, an anatomical imaging modality, with a limited role in specific molecular imaging. The sensitivity of MRI for contrast agents or molecular tracers is simply not as high as for the other imaging modalities. The sensitivity has been improved by using nanoparticle formulations, but these pose limitations on selected targets, due to their rapid clearance and uptake by macrophages. For this very reason they have been used clinically for selective imaging of macrophages, including those present normally in the liver and lymph nodes, and in inflammatory diseases such as atherosclerosis, multiple sclerosis and stroke. Nearly all nanoparticle formulations that have been clinically used are composed of superparamagnetic iron oxide (SPIO). Gadolinium-based agents have also been used, notably for targeting of fibrin in a setting where thrombus is present.

As for cellular MRI, at present at least eight clinical trials have been published that do not label cells in vivo — i.e., uptake by macrophages, but in vitro in the petri dish for the purposes of infusion or transplantation under MRI monitoring of cell delivery and cell distribution. These studies have shown the great potential of MRI for cellular imaging, especially for real-time MR-guided delivery and targeted intraparenchymal injections that are not possible with any of the nuclear or optical imaging techniques. Unfortunately, the SPIO formulations that have been used are no longer made, due to economical reasons.

A new way of labeling cells in vivo and also in vitro is to use fluorine nanoparticle formulations and 19F MRI; the first clinical trials are expected to occur later this year under investigational new drug approval.19F MRI was introduced more than 35 years ago, but its potential role in molecular and cellular imaging has only recently been realized. As the endogenous fluorine levels in the human body are near zero, the agents can be considered to be true “MR tracers,” allowing hot spot imaging — analogous to nuclear tracers — and not “contrast agents” as there is no anatomical image and no background signal. Hot spot MRI is expected to gain momentum in the upcoming years.

Fluorescence optical imaging is an emerging medical imaging modality that promises to complement current molecular imaging techniques. The agent in this imaging modality consists of a nonradioactive, fluorescent molecule that is activated by tissue-penetrating excitation light to produce emanating fluorescent light that is collected to form an image. Planar imaging is currently conducted in clinical studies with marketed commercial and investigational devices, while devices for small animal tomographic imaging are emerging into the commercial market.

There are, however, two potential limitations to fluorescence optical imaging modalities. First, tissue penetration depths may be limited — estimated from clinical studies in humans to be 3-4 cm — but sufficient for intraoperative imaging as well as for noninvasive imaging of lymph nodes and lymphatics. Second, background autofluorescence can limit sensitivity when using fluorescent dyes excited by visible or far-red light (at wavelengths that are shorter than 780 nm). Near-infrared (NIR) excited fluorophores (excited by NIR wavelengths longer than 780 nm) offer the greatest sensitivity due to the lack of background signal that arises from autofluorescence.

Indocyanine green (ICG) is a non-targeting, NIR imaging agent already approved for intravenous (IV) administration in humans for hepatic clearance studies. While its approved use depends on its detection, which is based on its dark green color, ICG is weakly fluorescent when excited with NIR light and has been used successfully as a NIR imaging agent in several clinical studies: intraoperatively, to assess vessel patency and lymphatic drainage patterns; and noninvasively, to assess blood perfusion and lymphatic architecture and function. The application of clinical NIR fluorescence imaging has been demonstrated with ICG for several investigational indications.

Although ICG has no functional groups for attachment to disease targeting moieties, there is a plethora of new “first-in-human” imaging agents that could extend the role of nuclear imaging beyond diagnosis and into the surgical theatre in the very near future. Brighter, NIR fluorescent dyes conjugated to antibodies, antibody fragments and peptides promise new clinical indications for molecular imaging. It is noteworthy that a typical NIR fluorescent dye molecule emits as many as 100 million low energy photons/second compared to the singular, high energy photon event that occurs following decay of a radionuclide used in nuclear imaging. While there is significant attenuation of low energy photons that limit tissue penetration depths, image acquisition times for noninvasive lymphatic imaging in humans has been reported as low as 20 milliseconds immediately following trace doses of ICG as opposed to several minutes of gamma camera imaging hours after administration of radiocolloid in conventional lymphoscintigraphy. While NIR fluorescence imaging is not likely to replace molecular imaging modalities, in the future it is apt to complement and expand upon their current clinical indications.

• Ryan Niederkohr, M.D., is associate physician with The Permanente Medical Group in Santa Clara, Calif. He earned his undergraduate degree from the University of Notre Dame and his medical degree from The Ohio State University, and completed a residency in nuclear medicine at the Stanford University Medical Center.

• Eva M. Sevick, Ph.D., is professor and Cullen Chair in Molecular Medicine at the University of Texas Health Science Center’s Brown Institute of Molecular Medicine where she directs the Center for Molecular Imaging. Sevick received her bachelor of science and master of science degrees in chemical engineering in 1983 and 1985, respectively, from the University of Pittsburgh and her doctorate in chemical engineering and bioengineering in 1989 at Carnegie Mellon University, where she performed her dissertation research in the area of tumor biology.