In an itnTV video, Contributing Editor Greg Freiherr offers an overview of MRI advances at RSNA 2015 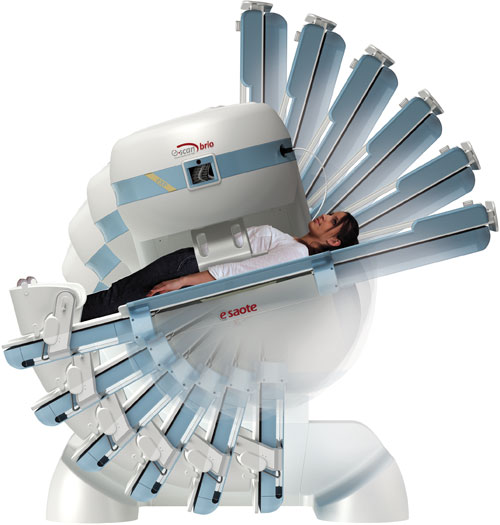 The open scanner is still alive and well, as Esaote demonstrated with its G-Scan Brio.

Introduced in the 1980s, magnetic resonance imaging (MRI) has become an integral part of any radiology department. The modality has most often been used for brain and spine scans, but new applications are expanding its capabilities in recent years. Vendors are also working to reduce both scan times and machine size for enhanced productivity. In an itnTV feature video (http://bit.ly/1O9pyDt), ITN Contributing Editor Greg Freiherr examines these and other cutting-edge MRI innovations he saw on the show floor at the 2015 Radiological Society of North America (RSNA) annual meeting, Nov. 29-Dec. 3 in Chicago.

The lungs have long been a difficult region to capture on MRI, because “certain tissues in the human body provide very little MR signal,” Suresh Narayan, senior manager, MR market development for Toshiba America Medical Systems, told Freiherr in the itnTV video. Toshiba presented a solution at this year’s RSNA, introducing an ultra-short echo time (UTE) sequence specifically for lung MR through the M-Power 3R5 platform. The technology acquires the images in four to five minutes, and the pathology is similar to that of a traditional lung computed tomography (CT) scan. Achieving these results without radiation or contrast makes it a viable alternative to CT scans.

The heart is the other major organ that has traditionally been difficult to image with MRI, and it could not capture certain information that other modalities can — blood flow, cardiac function and so on. GE Healthcare, in conjunction with Arterys, introduced a solution at RSNA 2015.

Traditionally, getting a complete 3-D MRI scan of the heart would require a specialized technologist to do multiple 2-D acquisitions across several patient breath-holds; this could make the exam take an hour or more. With ViosWorks, the complete scan is accomplished in one free-breathing slab acquisition at high isotropic resolution, reducing the scan time to under 10 minutes.

GE refers to ViosWorks as 7-D MRI, as it reveals seven dimensions of information (three in space, one in time and three in velocity direction), generating an enormous 20 GB of data. A supercomputer would be required to process that much data in real time, according to Panagiotelis, but thanks to Arterys, all of the ViosWorks data is processed and stored in a HIPAA-compliant cloud in real time for increased capacity. This also provides access to the images from anywhere, including on smartphones and tablets.

While new applications may be drawing a lot of attention, vendors are still rolling out enhancements related to brain scans as well. Siemens debuted two new applications at RSNA 2015 that can reduce brain scan times while enhancing image quality.

SMS (Simultaneous Multi-Slice) acquires multiple diffusion tensor imaging (DTI) slices simultaneously, an application that is particularly useful for surgical planning, according to Jan Chudzik, head of global product marketing, MR, for Siemens. “This is a paradigm shift because typically in the past we were acquiring those slices sequentially,” said Chudzik in the itnTV video. The largest benefit is that this reduces scan time significantly, a bonus for DTI patients and others who may have difficulty keeping still during the exam, including pediatrics. “This will have much greater potential even in the future because that can also be applied to other body regions,” Chudzik told Freiherr.

The other new application, GOBrain, performs clinically validated, comprehensive brain examinations in five minutes with the push of a button. This helps expedite exams in addition to reducing the need for sedation. Chudzik told itnTV that both solutions are still pending U.S. Food and Drug Administration (FDA) approval.

Rather than focusing on particular applications, some RSNA vendors chose to focus on overall image enhancement for their MRI systems. Philips, in collaboration with Dixon Technologies, debuted the mDixon scan sequence for itnTV, which helps simplify and accelerate complicated scans such as the liver.

“mDixon addresses one of the key challenges in MR imaging, which is fat saturation,” Martijn Hartjes, head of MR strategy for Philips, told Freiherr in the itnTV video. “You want to see certain anatomies, and that’s why you want to get rid of the fat.” Hartjes said this is typically done with sequences like SPIR (spectral presaturation with inversion recovery) and STIR (short-TI inversion recovery), “but what you sometimes see is that fat sat fails,” meaning the fat is not completely suppressed from the image. These types of scans can also take longer, Hartjes told itnTV. mDixon resolves both of these issues, offering complete fat suppression while actually reducing the scan time from four minutes to three minutes.

Hitachi introduced more than 40 different new image enhancement benefits with the release of the Evolution 5 software platform at RSNA. Some of the highlights include:

Increasingly patients are being treated with various implantable medical devices, including cardiac devices, large joint replacements and spinal implants. According to Philips, data from the Millennium Research Group indicates that 12.5 million people in the United States had implants in 2015, and that number is expected to grow 71 percent by 2020, reaching to 21.6 million people.

While these devices may be beneficial and even crucial to the patient’s care, they can present problems for radiologists. “Today in radiology departments it’s actually very difficult to scan these patients,” Hartjes told itnTV. “You have to adapt a lot of parameters and in some cases these patients actually get turned away from an MR exam.” More and more of these devices are becoming MR-conditional, which permits MRI scanning within certain parameters.

At RSNA 2015, Philips introduced the ScanWise protocol specifically for performing MR-conditional device scans. The user interface guides operators to set up the MRI system by inputting the MR-conditional values of the device in question, which only needs to be done the first time. All scan parameters are automatically adjusted based on the values entered.

In the early days of MRI, there was more demand for low-field open scanners built around permanent magnets, but today those models have largely been eclipsed by high-field superconducting scanners. The open scanner is still alive and well, however, as Esaote demonstrated with its G-Scan Brio at RSNA 2015.

The G-Scan Brio can tilt to put patients into a weight-bearing position up to a full 90 degrees, an application seeing increasing interest, Esaote’s Glenn Davis, USA sales vice president, told itnTV. This is because “some clinical pathologies, particularly in the MSK [musculoskeletal] environment, are not really apparent in the supine position,” he said. “I think that what we’re seeing is a renewed interest in it particularly because it offers this ability to look at biomechanics in a functional position.”

The body coil is placed on the patient in the supine position, and then positioning adjustments are made directly on the scanner. A full exam can be completed in six to eight minutes.

As MRI strives for the potential imagined long ago, it builds on success rooted in caring about the patient. New applications are coming from ways that get more from the signals that exist, and new ways to use existing technologies in and outside the traditional bounds of MR.

Advances in Cardiac Imaging at RSNA 2016

Comparison Chart: MRI Wide Bore Systems
(chart access will require a login, but is free and only takes a minute to register)

Comparison Chart: MRI Contrast Agents
(chart access will require a login, but is free and only takes a minute to register)

Comparison Chart: Cardiovascular MRI Analysis Software
(chart access will require a login, but is free and only takes a minute to register)