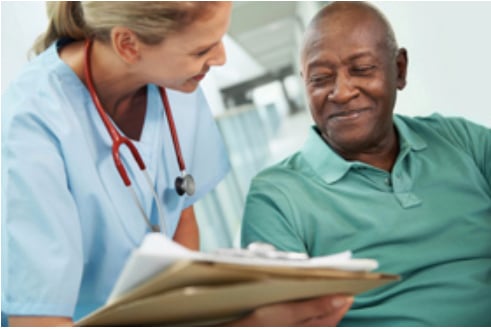 October 30, 2018 — While popular beliefs and population data suggest that African-American men are at higher risk of dying from prostate cancer than caucasian men, a new analysis of genetic data from a large prospective registry and clinical data from several randomized trials indicates that African-American patients may have comparatively higher cure rates when treated with radiation therapy. The study, which is the first report demonstrating improved prostate cancer outcomes for black men, was presented wat the 2018 annual meeting of the American Society for Radiation Oncology (ASTRO).

“Our findings suggest that African-American race is not independently associated with worse prostate cancer outcomes,” said lead author Daniel Spratt, M.D., an associate professor and chief of the genitourinary radiotherapy program at the University of Michigan Rogel Cancer Center. “When we started this project, we had the commonly-held assumption that African-American men harbor more aggressive disease that leads to lower survival rates. We were surprised, however, that they appear to be more responsive than Caucasian men to radiation therapy and have improved outcomes following this treatment.”

Cancer registries have reported that black men appear to be at higher risk of dying from aggressive prostate cancer, with an incidence rate almost 60 percent higher and a mortality rate two-to-three times greater than white men. What remains unclear, however, are how socioeconomic versus biological factors contribute to these disparities.

The two-part study from Spratt’s team examined biological factors that drive responses to prostate cancer treatment and may explain the disparity in outcomes. The team first investigated differences in how specific genes were expressed in tumor samples from 17,003 men (1,953 or 11.5 percent African-American) with prostate cancer, focusing on androgen receptor activity — a key driver of prostate cancer — and sensitivity to radiation, as well as outcomes following radiation therapy.

“Differences in gene expression between African-American and Caucasian patients revealed that African-American patients had lower DNA repair and more immunogenic tumors, both of which have been shown to predict better responses to radiation therapy,” Spratt said.

Spratt, who also co-chairs the radiobiology and radiotherapy working group for the Prostate Cancer Foundation, said the team’s findings, coupled with other recent analyses, confirm that the seeming racial disparities for prostate cancer are rooted more in societal causes than biology.

“Our results directly question previously held beliefs from population-based registry data that African-American men independently have worse prostate cancer outcomes than caucasian men,” he explained. “These findings strengthen the notion that most of the observed disparity found in population datasets regarding stage-for-stage outcomes between African-American and Caucasian men are reflective of social constructs and not rooted in biology.”

“Not only did both groups generally have similar prognoses, but African-American men treated with radiation therapy actually had higher rates of cure and excellent outcomes. Patients should be treated irrespective of race,” he added.