This article appeared as a sidebar to an article "SBRT with Real-Time Target Tracking" in the November/December 2011 issue. 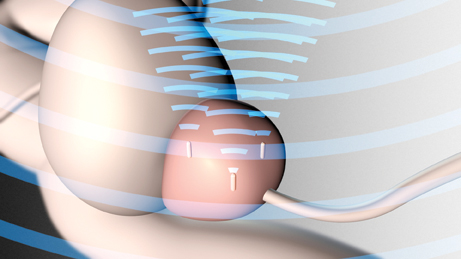 The 39-month Phase II study is enrolling 66 patients who will receive five 30-minute fractions of 7.4 Gy, with at least two days in between fractions for a total of 37 Gy. The shortened five-fraction treatment will range from 15-19 calendar days in comparison to conventional treatment protocol of 40-45 daily treatments. This is the first multi-institutional study to incorporate use of the Calypso real-time tumor tracking technology and investigators are optimistic that use of the technology in concert with a small number of dose-intensified treatment sessions may optimize SBRT.

The Calypso system uses GPS for the Body technology to safely guide radiation delivery during prostate cancer treatment. Beacon electromagnetic transponders, smaller than a grain of rice, are permanently placed in a patient’s prostate or prostatic bed. Each transponder emits a unique radiofrequency signal to the system, which then determines the exact location and motion information about the tumor target. Because the tumor can be accurately tracked and monitored, precise targeted radiation can be delivered to the tumor while sparing surrounding healthy tissue and organs.

The primary goals of this study are to assess the safety of patient treatment utilizing more sophisticated tools for planning, setup and monitoring using a hypofractionated radiation regimen for prostate cancer, and to assess the practical ability to deliver a hypofractionated treatment with small treatment margins and a limited degree of movement before interruption of treatment. Another goal is to generate sufficient preliminary evidence about the relationships between the technologies and patient toxicity, both clinically evaluated and self-reported on quality-of-life (QOL) scales, and biochemical response to inform design of a potential subsequent confirmatory study.

The protocol requires treatments to be performed with a stereotactic technique using a 3-D coordinate system defined by implanted transponders. Only electromagnetic localization and tracking with the Calypso system will be permitted. According to investigators, the Calypso technology enables physicians to localize the prostate in real-time, providing necessary information regarding motion that occurs due to normal bladder and bowel filling. With this information, physicians are able to use tighter treatment margins, which should lessen the risk for both acute and late toxicities. The use of the Calypso system in performance with a small number of dose-intensified fractions may be a way to augment hypofractionated radiation therapy. Combining Calypso with SBRT also may create a treatment approach allowing patients to maintain their quality of life while spending much less time away from family and work.

Currently, single-institution studies have reported on the ability of utilizing hypofractionated RT, yet the ability to translate this technique to a more broad-based setting has not yet been reported. In addition, prostate localization and the corresponding treatment margins are critical in obtaining optimal results. Investigators of this study suggest that data from this multi-institutional Phase II trial should provide sufficient basis for evaluation in a subsequent Phase III trial if the data are supportive of the previous single-institutional studies.