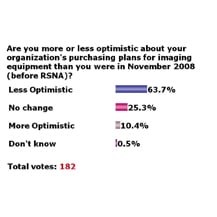 In July 2008, The MarkeTech Group (TMTG) launched imagePRO(TM) the first longitudinal opt-in panel of over 600 U.S.-hospital based imaging administrative directors and managers. ImagePRO members have agreed to participate in TMTG surveys and polls and have been carefully selected to accurately represent the hospital imaging market.

Over the past several months, TMTG polled the imagePRO panel twice (once in November 2008 and again in February 2009), regarding the economic crisis and its impact on imaging equipment purchasing and utilization patterns. While the overall outlook from imagePRO panel members is increasingly pessimistic, there still exists a sense that the climate will eventually turnaround.

Panel members were asked about their current level of optimism regarding their organization’s purchasing plans for imaging equipment as compared with their opinion during the earlier poll in November 2008. The new poll showed that 64.8 percent were less optimistic now than they were several months ago (Exhibit C).

This dramatic decrease in optimism of panel members compared to a more modest downgrading of their anticipated purchasing plans (as compared to the November 2008 poll), indicates that there might be a significant psychological component to their negative economic outlook. This data suggests a “wait and see” attitude in terms of capital spending.

Because the imagePRO panel represents approximately 25 percent of the nation’s hospital imaging purchasing base, polls and surveys fielded with this panel are of extremely high quality in terms of reliability and market representativeness.

imagePRO is a registered trademark (TM).

For more information: The MarkeTech Group.com 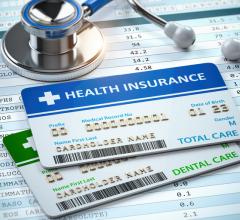