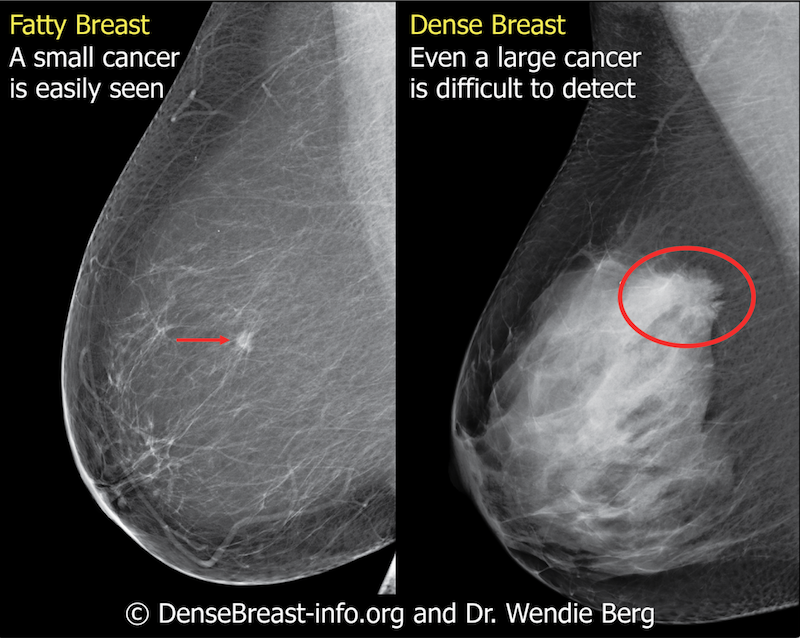 Fatty tissue and breast density may be considered in the context of many factors that affect the occurrence and detection of breast cancer. Permission to publish provided by DenseBreast-info.org

When planning a screening program to detect the early signs of breast cancer, age is a major consideration. But it should not be the only one, said Diana Miglioretti, Ph.D., a biostatistics professor at the University of California, Davis.

In an April 5 presentation at the Society for Breast Imaging (SBI)/American College of Radiology (ACR) Breast Imaging Symposium in Hollywood, Fla., Miglioretti noted that several factors can strongly affect the development of breast cancer. If women are to be accurately stratified by risk, these factors should be considered, she said.

One of them is age. The biostatistics professor explained how age can influence the risk of breast cancer (the vast majority of breast cancers occur in women older than age 50, according to the breast cancer surveillance consortium, abbreviated as BCSC) — and what it means for screening with FFDM (full-field digital mammography) and DBT (digital breast mammography).

How Individual Women Can Calculate Risk

Much of the risk of developing breast cancer depends on multiple factors, which is why BCSC has come up with a breast cancer risk calculator. Miglioretti highlighted this calculator in her symposium presentation. The free-of-charge calculator is available on the web or as an iPhone-compatible app that can be downloaded. It calculates and compares a woman’s risk of cancer to that of the average woman.

“So if a woman has twice the average risk, she might consider more aggressive screening or start screening early,” Miglioretti said.

The calculator considers a woman’s:

Miglioretti noted that risk assessment is critically important to coming up with a personalized approach to screening, which she strongly advocates. The biggest benefit from breast cancer screening is early detection, she said, because when breast cancer is detected early, “you have more of a chance to prevent death and morbidity.“

But the chance of physical and psychological harm from screening should be considered. Either or both may result from false-positives, she said, noting that physical harm may come from unneeded chemotherapy or surgery. Psychological harm may occur when a woman thinks she has cancer but doesn’t, Miglioretti said.

The development of a personalized screening approach contrasts sharply with current guidelines, which rely heavily on a single factor, age. At least one guideline recommends that screening begin at age 50; others advise the start of screening much younger — one as early as age 40 (the American Cancer Society Guidelines for the Early Detection of Cancer.)

“But there are women in their 50s who are at lower risk than someone in their 40s,” she said. “Using a risk-based approach would actually identify more women with potential benefit from screening than using just age.”

Current guidelines may seem inconsistent because they recommend that screening start at different ages, Miglioretti said. But all guidelines say that women in their 40s should use personal choice to decide whether screening is right for them, she said: “We should empower women to make these decisions for themselves.”

Women, Miglioretti emphasized, should be encouraged to make their own choices about when to start screening and how aggressively to do so (whether annually or biannually, for example). Their decisions should be based on how they value the benefits versus harms, although some patients, she noted, may want to defer to their physicians.

“And that is fine as well,” she said. “Either way, it is the patient’s choice.”

VIDEO: Age, Interval and Other Considerations for Breast Screening

Individual and Combined Effects of Age, Breast Density, and Hormone Replacement Therapy Use on the Accuracy of Screening Mammography

VIDEO: A Discussion on Proposed FDA Rules for Mammography Reporting